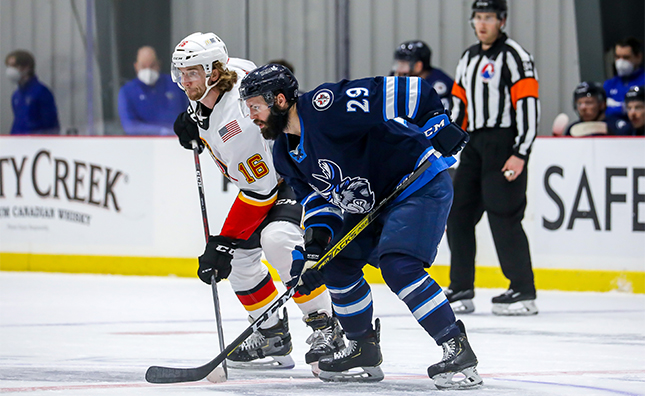 The Manitoba Moose (7-7-2-0) claimed a 4-2 victory against the Stockton Heat (8-3-0-0) on Saturday afternoon at Bell MTS Iceplex. The clubs kicked off the contest in strong fashion and exchanged 28 shots during the first period. With 4:45 left in the first period, Rob Hamilton ripped a shot through traffic that found its way past Moose netminder Eric Comrie and gave the Heat a 1-0 lead. Just over four minutes later, Dylan Samberg found David Gustafsson for the one-timer and his attempt from the high-slot tied the game 1-1.

With 4:23 remaining in the second period, Declan Chisholm wristed a shot from the blue line that C.J. Suess deflected past Stockton goaltender Artyom Zagidulin to gain the 2-1 lead for the Moose. With just 35 second remaining in the frame, Matthew Phillips scored to tie the game at two-all.

At 6:36 of the third period, on a Moose power play, Kristian Vesalainen battled through the Heat defence to set up Cole Perfetti who scored the eventual game-winning goal for Manitoba. With under two minutes remaining in regulation, Ville Heinola found Stockton’s empty net and secured Manitoba’s 4-2 win.

“The effort was there. Guys are battling hard. Their shift length was right and the energy level was right. The way they competed was right so it was a real solid game. We won the special teams battle. Our goalie was pretty solid. I thought it was a full 60 minutes and all players contributed in all ways offensively and defensively. It was a real good game for us.”

“It’s been an honour to be a Manitoba Moose and Winnipeg Jet. Every time I’m here I love it. It’s nice to be a part of the tradition with the Manitoba Moose and the organization. It means a lot to me and I’m really thankful to be able to have played here.”

The Moose take on the Laval Rocket on March 25 at Bell MTS Iceplex. Puck drop is scheduled for 6 p.m. The game is available on MooseHockey.com/LISTENLIVE, CJOB.com/sports and AHLTV.com. The broadcast starts at 5:45 p.m.