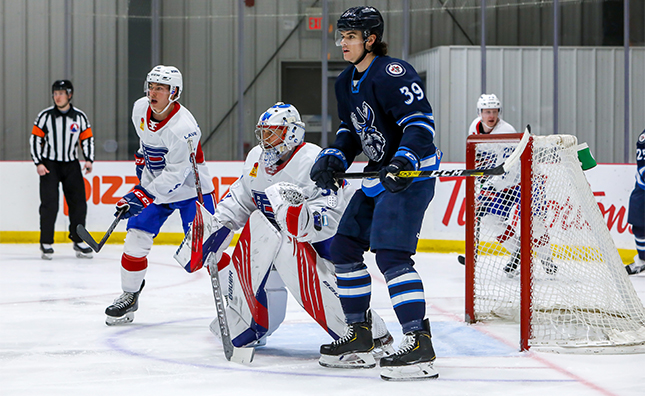 The Manitoba Moose (8-8-2-0) dropped a 1-0 contest against the Laval Rocket (13-4-1-1) on Friday night at Bell MTS Iceplex. Just 2:43 into the first period, Laval’s Joel Teasdale scored on a two-on-one opportunity to gain the early one-goal lead for the Rocket. The shot total leaned in Laval’s favour by an 8-4 count during the first frame.

The second frame remained scoreless despite the clubs testing each other with eight shots a piece. The Moose earned a power play chance with 3:29 off the clock in the second however nobody was able to find the back of the net. The Rocket took another penalty with 20 seconds remaining in the second, giving Manitoba an extra man to kick off the third.

On the power play opportunity, Nathan Todd hit iron and nearly tied the game. Dylan Samberg also found a good chance during the third that went off the post with the seconds ticking down. The Moose outshot the Rocket by a 7-3 count during the third period however Laval’s netminder Cayden Primeau kept Manitoba off the board and the Rocket held onto the 1-0 victory.

Quotable
Defenceman Jimmy Oligny (Click for full interview)
“I’m very proud of how we’re playing. They are a very good team we faced yesterday and tonight. The closeness of the game just shows how good we can play. It could have went either way tonight.”

What’s Next?
The Moose face off against the Laval Rocket, March 28 at Bell MTS Iceplex. Puck drop is scheduled for 2 p.m. The game is available on MooseHockey.com/LISTENLIVE, CJOB.com/sports and AHLTV.com.