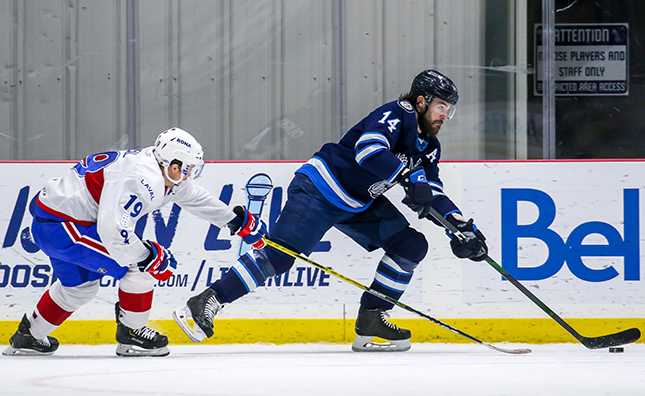 Game Story
The Manitoba Moose (8-9-2-0) were defeated 5-3 by the Laval Rocket (14-4-1-1) on Sunday afternoon at Bell MTS Iceplex. At 8:44 of the first period, on a Manitoba power play, Cole Perfetti displayed some fancy footwork and set up Kristian Vesalainen for a one-timer. Vesalainen made no mistake and gave the Moose the 1-0 advantage. With 2:32 remaining in the first frame, Rafael Harvey-Pinard scored for Laval to even the score at 1-1.

At 3:34 of the second period, Jordan Weal found a breakaway opportunity, but Mikhail Berdin denied his chance. With 4:52 left in the second frame, David Gustafsson stole the puck from Laval and found Kristian Reichel who patiently skated cross crease and flipped a backhand past Rocket netminder Cayden Primeau.

At 8:43 of the third frame, Leon Gawanke ripped a shot from the blueline to give the Moose the 3-1 lead. With 5:59 left in the third, Ryan Poehling scored on a power play to get the Rocket within one. Just 11 seconds later, Hayden Verbeek stole the puck and scored to tie the game. With 3:46 left in regulation, Jordan Weal found a loose puck, spun and fired home the eventual game-winning goal for the Rocket. With 23 seconds left in the third, Joseph Blandisi found Manitoba’s empty net and stamped Laval’s 5-3 win.

Quotable
Head Coach Pascal Vincent (Click for full interview)
“The team played well. We played a solid first period. We played a solid second period. We were in total control, scored a nice goal in the third to make it 3-1 and then individual mistakes whether it was a penalty or a turnover cost us the game.”

Moose Forward Kristian Reichel (Click for full interview)
“It’s tough, because I think for 54 minutes, we were the better team. Then they scored one lucky goal on a power play and the whole momentum changed. We didn’t manage it. We need to shake it off and take the good things from that game and prepare for Tuesday.”

What’s Next?
The Moose take on the Laval Rocket on Tuesday afternoon at Bell MTS Iceplex. Puck drop is scheduled for 4 p.m. The game is available on MooseHockey.com/LISTENLIVE, CJOB.com/sports and AHLTV.com.