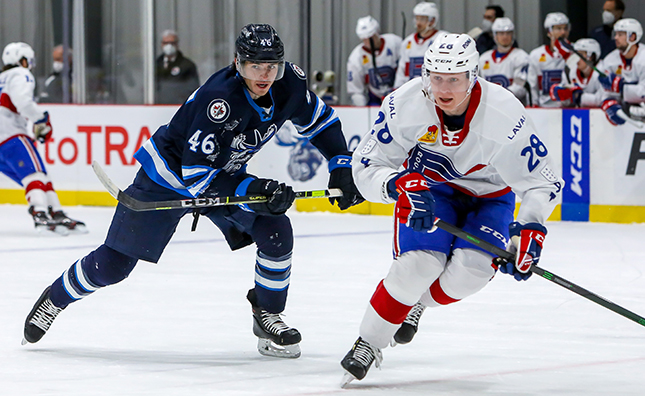 Game Story
The Manitoba Moose (8-10-2-0) were on the losing end of a 3-1 final against the Laval Rocket (15-4-1-1) on Tuesday evening at Bell MTS Iceplex. The Moose came charging out of the gate and outshot Laval by a 10-0 count to kick off the first period. Manitoba did not allow the Rocket a shot until 11:10 of the first. With 1:24 remaining in the first frame on a Moose power play, Kristian Vesalainen blasted a one-timer that deflected right to Cole Perfetti who buried the rebound and gave Manitoba the 1-0 lead.

Just 47 seconds into the second period, Corey Schueneman scored for Laval on a breakaway opportunity and tied the game 1-1. The clubs exchanged seven shots each however the game stayed tied heading into the third period.

At 2:01 of the third period, Michael Pezzetta scored the game-winning goal on a two-on-one opportunity for the Rocket. With 45 seconds remaining, Joseph Blandisi was awarded an empty-net goal and secured Laval’s 3-1 victory.

Quotable
Head Coach Pascal Vincent (Click for full interview)
“We didn’t give much. Two breakdowns on the goals against. Individual mistakes and we didn’t take advantage of our chances. The pace was right. Battle level was right. We had some good chances.”

Forward Cole Perfetti (Click for full interview)
“There’s lots to learn. Every game I’ve gotten better. I find that I’m learning every game. Little things here and there; on the wall, on the power play, on five-on-five, in all three zones and in all different situations. Experiencing new things and learning from it. I think my game has come a long way and I’ve been really happy with how I’ve developed in the last 20 games. It’s been a great learning experience.”

What’s Next?
The Moose take on the Belleville Senators, April 7 at Bell MTS Iceplex. Puck drop is scheduled for 6 p.m. The game is available on MooseHockey.com/LISTENLIVE, CJOB.com/sports and AHLTV.com.