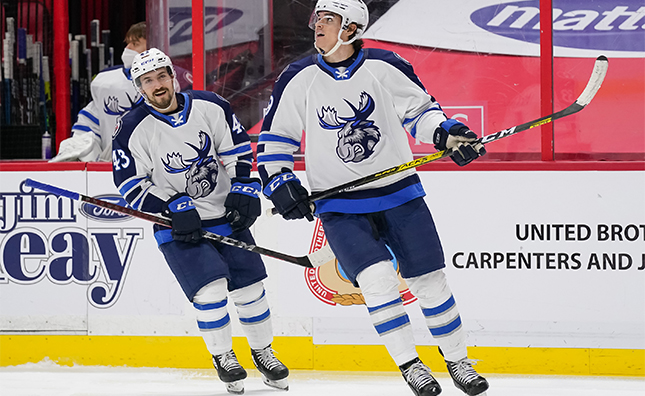 The Manitoba Moose (6-6-0-0) claimed a 6-2 victory against the Belleville Senators (1-6-0-0) on Saturday afternoon at Canadian Tire Centre in Ottawa, Ont. At 7:48 in the first period, Egor Sokolov cashed in on a rebound and gave Belleville the 1-0 lead. With just under five minutes remaining in the opening frame, Mark Kastelic found Cole Reinhardt posted in front of Moose netminder Mikhail Berdin however Berdin denied his attempt and kept the Moose within one.

With 6:27 gone in the second period on a five-on-three opportunity, Nathan Todd set up Ville Heinola who wound up for a slap-shot and tied the game a 1-1. Just under a minute later on another power play chance, Skyler McKenzie capitalized on a loose puck and gave the Moose the 2-1 lead. Just 10 seconds remaining before the clock expired in the second, David Gustafsson flipped a back-hand pass from the sidewall towards Nathan Todd who was rushing up the middle. Todd tipped Gustafsson’s pass out of the air and past Belleville’s netminder Filip Gustavsson for a 3-1 lead.

Manitoba struck again 3:32 into the third period on another Moose man-advantage as Jeff Malott collected on a rebound and improved Manitoba’s lead to a 4-1 count. Just under two minutes later, Hayden Shaw ripped a shot from the blue line that Malott redirected to score his second of the game. With 4:21 left in the period, Alex Formenton reduced the Moose lead to 5-2 with a power play goal for Belleville. With less than a minute remaining in the game, Haralds Egle sniped his first career AHL tally and marked Manitoba’s decisive 6-2 victory.

“If there’s one thing we expect of them it’s to work hard and be smart. We have a system and we want to play within our system but we want to see how creative we can be. Also managing those back-to-back games and being smart about it. I think we did a good job.”

The Moose return home and face off against the Stockton Heat on Monday, March 8 at Bell MTS Iceplex. Puck drop is scheduled for 6 p.m. CT. The game is available on MooseHockey.com/LISTENLIVE, CJOB.com/sportsand AHLTV.com. Broadcast will start at 5:45 p.m. CT.