Recap: Manitoba 3 at Belleville 4 SO 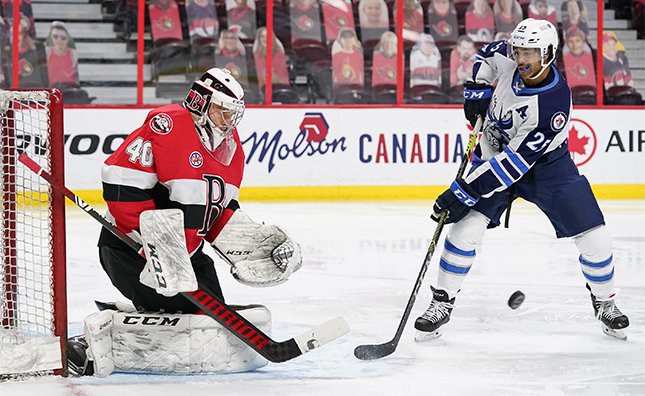 Game Story
The Manitoba Moose (18-11-2-2) dropped a 4-3 shootout decision against the Belleville Senators (14-15-1-0) on Tuesday night at Canadian Tire Centre in Ottawa, Ont. At 1:27 of the first period, Peter Krieger made a tenacious play down low to force a turnover and flipped a pass up the middle that Adam Brubacher was there to collect. Brubacher’s initial shot was blocked, but the defenceman found his own rebound and scored to gain a 1-0 lead for the Moose. With 6:08 remaining in the first period, Haralds Egle carried the puck around the end boards and, from behind the Senators’ net, sent a pass into the slot. The puck deflected off a Belleville player in front of the crease, but skipped right to the tape of Nathan Todd who improved Manitoba’s advantage to 2-0.

At 7:54 of the second period on a Belleville power play opportunity, Vitaly Abramov cashed in on a rebound making the score 2-1 in favour of the Moose. With 4:24 to go in the middle frame, Joseph LaBate earned a short-handed breakaway opportunity which Manitoba’s netminder Mikhail Berdin stopped with a diving poke check. Nathan Todd regained possession of the puck and the Moose broke out the other way. On that same Moose possession at 4:05 of the second period, Dylan Samberg blasted a shot from the blueline that C.J. Suess deflected through his legs and over Sogaard’s shoulder that extended Manitoba’s lead to a 3-1 count.

With 2:11 off the clock in the third period, Ridly Grieg found space in Manitoba’s zone and ripped a snapshot behind Berdin to get the Senators within one. With 7:12 remaining in regulation, Cole Cassels tipped in Colby Williams’ attempt and tied the game at 3-3. Neither club found the go-ahead goal during regulation and the game went to overtime.

Manitoba’s best chance in extra time came during a two-on-one opportunity as Leon Gawanke blasted a shot against Sogaard but the netminder denied the offering. The teams registered two shots each during extra time but the goaltenders stood tall for their clubs and forced a shootout. David Gustafsson was the lone goal scorer for the Moose while Abramov and Egor Sokolov each capitalized on their chances and led the Senators to a 4-3 victory.

Quotable
Head Coach Pascal Vincent (Click for full interview)
“I think we missed a few opportunities to shoot the puck. Our net presence was right, we were moving the puck right. Our special teams were good, power play had a lot of good chances, a lot of good looks. Penalty kill was good too. And then in the third it’s one missed read, second goal against, and the third it’s a puck that is deflected, good play by them. So we faced a pretty good team today and I thought it was a well-played game.”

Forward C.J. Suess (Click for full interview)
“First and second I thought we were playing pretty well. We were moving the puck and making plays. I think we were making them quick and that’s what really helped us out. I think we slowed down a little bit in the third and they took advantage of that.”

What’s Next?
The Moose face off against the Belleville Senators on Friday, May 14. Puck drop is scheduled for 6 p.m. CT. The game is available on MooseHockey.com/LISTENLIVE, CJOB.com/sports and AHLTV.com.