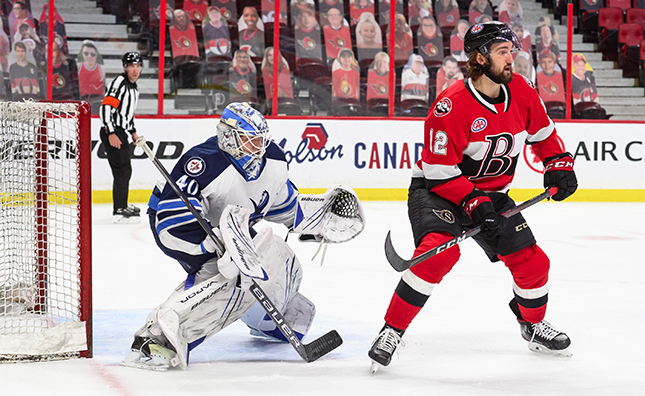 Game Story
The Manitoba Moose (18-11-3-2) were defeated 3-2 in a overtime decision by the Belleville Senators (15-15-1-0) on Friday night at Canadian Tire Centre in Ottawa, Ont. With 8:08 remaining in the first period during a five-on-three power play opportunity for the Moose, Nathan Todd took the puck to the net but couldn’t connect on his attempted pass. Jeff Malott was posted in front of Belleville’s netminder Mads Sogaard and cleaned up the loose puck giving Manitoba the 1-0 advantage. Mikhail Berdin was solid during the opening frame and turned away all 16 of Belleville’s shots.

The intensity was amplified during the second period as the club’s exchanged seven minor penalties, five of which were taken by the Senators. With 8:14 off the clock in the middle frame, Logan Brown collected a rebound and flipped a backhand attempt behind Berdin tying the game 1-1. With 2:24 left in the second frame during four-on-four play, Jonathan Aspirot capitalized on a one-timer feed from Brown gaining a 2-1 lead for the Senators.

At 4:55 of the third period, Haralds Egle flipped a shot on net that Sogaard initially stopped but the puck came loose. Before the netminder could react, Egle stole the puck netted a backhand shot with authority tying the game at 2-2. Neither club was able to secure the go-ahead marker during regulation and the game was decided in extra time. Just 18 seconds into overtime, Cole Reinhardt rushed into Manitoba’s zone alone and made a move around Todd to cut his way to the net. Berdin stopped the forward’s initial attempt, but the puck bounced behind the netminder and trickled into Manitoba’s net for Belleville’s 3-2 victory.

Quotable
Head Coach Pascal Vincent (Click for full interview)
“We stayed in the fight, our compete level was right but Belleville is a fast team. They have a few guys that played in the NHL this year and you could tell. Their execution is a little bit faster and their gap control is really good so we had to adjust. But I thought in the third period we were very good. We were able to sustain some o-zone play. And we stayed in the game, that’s a big point for us.”

Forward Haralds Egle (Click for full interview)
“I think our execution lacked a little bit today. And with that, we tried to make, we strayed away from our game plan a little bit and tried to make up for it instead of sticking to our routes and to our plays. But I think that’s something we can talk over and a certain mindset we can go over for tomorrow and fix that.”

What’s Next?
The Moose take on the Belleville Senators on Saturday night. Puck drop is scheduled for 6 p.m. CT. The game is available to on 680 CJOB, MooseHockey.com/LISTENLIVE, CJOB.com/sports and AHLTV.com.