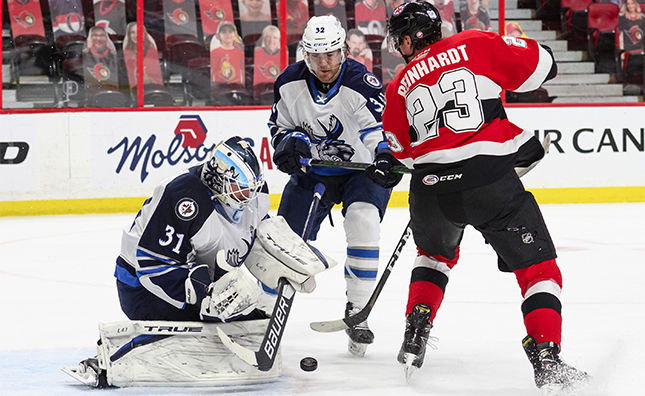 Game Story
The Manitoba Moose (18-12-3-2) lost a 3-2 final against the Belleville Senators (16-15-1-0) on Saturday night at Canadian Tire Centre in Ottawa, Ont. At 3:36 of the first period, Clark Bishop carried the puck into Manitoba’s zone and flipped a backhand pass to Logan Shaw streaking down the middle. Shaw made a nice move in front of Moose goaltender Cole Kehler and netted the attempt giving the Senators an early 1-0 lead. Manitoba edged the Senators in shots during the first period by a 9-4 count.

With 7:44 remaining in the second period, Nicholas Jones made a slick pass to David Gustafsson who earned a breakaway chance. The centreman capitalized on his opportunity and went bar down scoring for the Moose and tying the game 1-1. Special teams were a notable factor during the second frame as the clubs exchanged 34 penalty minutes including two 10-minute misconducts and a double minor. With 1:30 remaining in the second, Belleville nearly scored a go-ahead marker as Egor Sokolov connected on a one-timer look however his attempt went off the post and the game remained tied 1-1 heading into the final frame.

At 5:09 of the third period on a Belleville power play opportunity, Jonathan Aspirot ripped a shot from the top of the circle that found the back of Manitoba’s net and earned the Senators a 2-1 advantage. Just 40 seconds later on a Manitoba man advantage, Nathan Todd snapped a shot off of David Gustafsson’s faceoff win. Belleville’s goaltender Kevin Mandolese initially saved the attempt but the puck dropped and the netminder lost sight of the loose puck. Todd made a diving play and powered the puck into the Senators’ net and evened up the scoreboard at 2-2. With 4:05 remaining in regulation, Mark Kastelic won a faceoff in Manitoba’s end and found Parker Kelly waiting behind him. Kelly blasted a shot through traffic and scored the go-ahead goal for the Senators, securing the club’s 3-2 win.

Quotable
Head Coach Pascal Vincent (Click for full interview)
“I think in the third period we just ran out of gas but the mindset was right. They played the right way. They were ready from the start. Again, like I was saying, we were playing fast. Our transition game was really good. Gap control was right. Forecheck was right. Lots of good things.”

Forward David Gustafsson (Click for full interview)
“I think everyone really did their best and worked as hard as they could, but I don’t know. Belleville played great today too and we just couldn’t get the puck in. So tomorrow, if we play the same game, I think we’re going to win.”

What’s Next?
The Moose are scheduled for their final game of the 2020-21 season against the Belleville Senators on Sunday afternoon at Canadian Tire Centre in Ottawa, Ont. Puck drop is scheduled for 3 p.m. CT. The game is available on 680 CJOB, MooseHockey.com/LISTENLIVE, CJOB.com/sports and AHLTV.com.