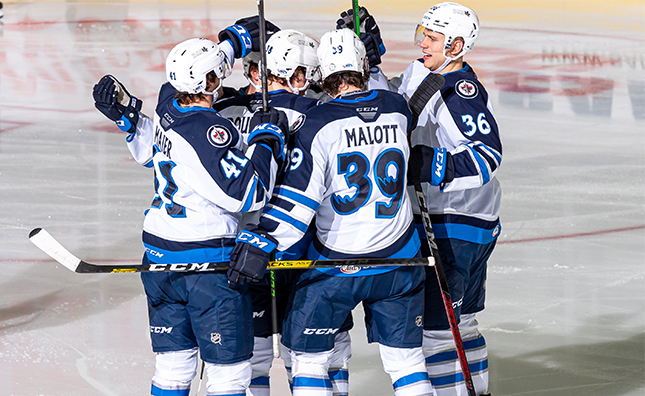 The Manitoba Moose (17-11-2-1) defeated the Toronto Marlies (11-14-0-2) in a 5-4 shootout decision on Saturday afternoon at Coca-Cola Coliseum in Toronto, Ont. Just 38 seconds into the opening frame, Trent Bourque ripped a shot through traffic and gained an early 1-0 lead for the Moose. At 4:28 of the first period, Tyler Gaudet traveled cross crease and spun around shooting the puck past Manitoba netminder Mikhail Berdin to tie the game 1-1. Just 2:18 later, Nick Robertson cashed in on a loose puck and gave the Marlies a one-goal lead. With 2:55 remaining in the first frame, Haralds Egle worked his way through the Marlies zone before blasting a shot behind Toronto’s netminder Frederik Andersen to even up the scoreboard at 2-2.

At 1:44 of the second period, Nicholas Jones sent a pass to Cole Perfetti in Manitoba’s zone and the centreman went to work. Perfetti powered down the middle, weaved through Toronto’s zone and snapped a wrist-shot top shelf marking a 3-2 advantage for the Moose. Just 36 seconds later, Toronto answered as Mac Hollowell blasted a one-timer past Berdin and evened up the score yet again. With 1:58 remaining in the second period, Teemu Kivihalme snapped a shot into Manitoba’s net and Toronto earned a 4-3 lead.

Midway through the third period, C.J. Suess blasted a shot past a screened Andersen and scored the equalizer for the Moose. Neither team found the go-ahead goal during the final 10:18 of the third and the game went to the overtime.

Both clubs found prime opportunities to end the game for their squad during the extra five minutes of play. At 1:32 of overtime Kalle Kossila attempted the “Michigan” and nearly pulled it off however Mikhail Berdin raised his elbow at the last second to close Kossila’s window. Midway through overtime, David Gustafsson saw a chance to end the game as he powered his way through Toronto’s zone, toe-dragged his defender and found his way to the net but Andersen denied his attempt and overtime remained scoreless. During the shootout, Gustafsson got another chance to end the game for Manitoba during the fourth round of players. This time he cashed in by snapping a shot glove-side past Andersen for the 5-4 shootout victory.

Quotable
Head Coach Pascal Vincent (Click for full interview)
“We like our chances every night. We just compete and stick with the plan and manage the puck. Finding ways to make some adjustments in games and the guys believe in themselves. So down by one after the second period, it’s a good challenge for us and again, the guys responded well.”

Defenceman Trent Bourque (Click for full interview)
“It starts in the dressing room. We have such a tight-knit group and people are willing to put their body on the line for each other. Like you saw, we went down late in the game and came in after second period and talked amongst each other and with the coaches and stuck to our game plan and came out on top.”

What’s Next?
The Moose face the Toronto Marlies Sunday afternoon at Coca-Cola Coliseum in Toronto Ont. Puck drop is scheduled for 2 p.m. CT. The game is available on MooseHockey.com/LISTENLIVE, CJOB.com/sports and AHLTV.com.