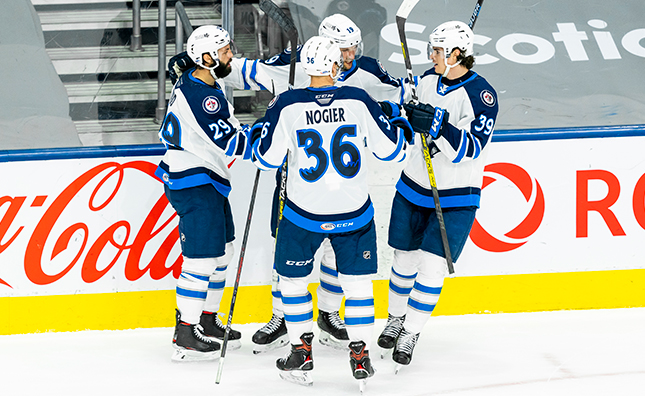 Game Story
The Manitoba Moose (18-11-2-1) were on the winning end of a 4-3 final against the Toronto Marlies (11-15-0-2) on Sunday afternoon at Coca-Cola Coliseum in Toronto, Ont. With 6:33 remaining in the first period, Nathan Todd made an impressive between-the-legs play to keep possession of the puck in Toronto’s end, then tucked a no-look pass behind him to a waiting Hayden Shaw. The defenceman ripped a one-timer past Marlies netminder Joseph Woll and earned the 1-0 lead for Manitoba. Woll was solid during the first period and kept the Marlies in the contest as he stopped 19 of the 20 shots the Moose tested him with during the first period alone. With 5:36 left in the first frame, Cole Maier saw a shining opportunity to extend Manitoba’s lead as he switched to his backhand and flipped the puck into a seemingly open net. Woll dove to stop the attempt and successfully used his paddle to bat the puck out of mid-air keeping the Moose from extending their lead.

Just 28 seconds into the second frame, Kenny Agostino collected a rebound and scored for the Marlies tying the game 1-1. The Moose found opportunities to regain the lead during the second period as Ty Pelton-Byce and Peter Krieger both registered shots that beat Woll but their attempts hit iron. With 1:44 left in the period, the Moose earned a three-on-two opportunity and took advantage. David Gustafsson broke out of Manitoba’s zone and found Jeff Malott trailing up the middle. Malott flipped a backhand feed to Todd who snapped a shot into Toronto’s net giving the Moose a 2-1 advantage.

At 3:42 of the third period on a Marlies man advantage, Pavel Gogolev flipped a shot short-side and tied the game 2-2. The Moose answered with a power play goal of their own as Kristian Reichel received a pass, patiently chose his target and blasted a shot past behind Woll making the score 3-2 in favour of Manitoba. With 5:25 remaining in the third, Todd sent a pass from the corner that found Gustafsson at the top of the circle. Gustafsson cashed in on a one-timer and snapped the eventual game-winner for the Moose. With 3:47 left in regulation, Bobby McMann scored a goal for the Marlies to get Toronto within one however it wouldn’t be enough to complete the comeback as Manitoba held on and marked a 4-3 victory.

Quotable
Head Coach Pascal Vincent (Click for full interview)
“Those guys are getting the job done. They stay in the moment. We’re in a good sequence, there’s no doubt. But it’s been the work ethic and the intensity and playing the right way. It’s been there since day one. You get to really admire the way they are playing every single day. I get the chance to see them in practices too and they play hard, they practice hard, they try to get it right. And it’s not always perfect, but their intensity and their desire to make it right is always perfect.”

Forward Nathan Todd (Click for full interview)
“We’re winning games and we’re playing as a team and everyone is having a lot of fun. So if we just keep doing that for the last (four) I think it would be a great way to end the season.”

What’s Next?
The Moose face off against the Belleville Senators Tuesday, May 11 at the Canadian Tire Centre in Ottawa, Ont. Puck drop is scheduled for 6 p.m. CT. The game is available on MooseHockey.com/LISTENLIVE, CJOB.com/sports and AHLTV.com.