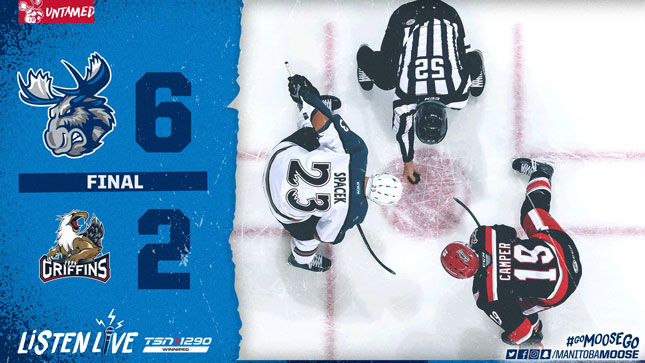 The Manitoba Moose (7-6-0-0) wrapped up their four-game home stand with a 6-2 win over the Grand Rapids Griffins (6-6-0-1) at Bell MTS Place on Retro Jersey Night. The wild first period started with Skyler McKenzie finishing a Felix Girard feed on an odd-man rush. Just over six minutes later, forecheck pressure from C.J. Suess created a turnover for Mason Appleton, who found Kristian Vesalainen in the slot, and the rookie scored his first AHL goal. Only 42 seconds later, it was Seth Griffith creating a giveaway in the Grand Rapids end, JC Lipon skated the puck around the net and found Jansen Harkins for the back-door tap-in.  Immediately after the goal, some bad blood spilled over with some pushing and shoving. That continued right up until the horn, and the teams finished the first with a combined 18 penalty minutes, and the Moose leading 3-0.

The penalty kill continued it’s success in the second as each team had another power play chance, but were unable to score. Eric Comrie became the first Moose goaltender to crack the 4,000 career-save mark with 5:50 left in the second. With just over a minute left in the period, Alexis D’Aoust pushed the lead to 4-0 with his first as a Moose. The goal came off a pretty pair of passes from Michael Spacek and Emile Poirier.

Early on in the third period, subsequent penalties turned into some 4-on-4 hockey. Grand Rapids used the extra space on the ice to break the shutout when Chris Terry finished a two-on-one. Near the mid-way point of the period, an Appleton shot from below the goal line bounced of Harri Sateri’s back and into the net. The Moose increased the lead with Kristian Vesalainen’s second goal of the night off a feed from Peter Stoykewych. The Griffins’ Turner Elson scored on a slapshot from the faceoff dot with just over one minute left in the game, making the final score 6-2.

Captain Peter Stoykewych on the team play – “A lot of plays started out of our own zone, so don’t discount the defencemen. I thought everyone played well from the net out, [Comrie] obviously made some big saves to preserve that lead and we were able to capitalize on our chances.”

Forward Jansen Harkins on Retro Jersey Night – “They looked pretty sharp out there, hopefully we can get back in them pretty soon. Obviously having Keane there to drop the puck was pretty special, with what he did for the city and the team.”

The Moose head out on the road for four games starting with a daytime game on Tuesday (10:30 a.m. CT) against the San Antonio Rampage. Don’t forget that all away games are broadcast on moosehockey.com/listenlive/, the Moose App, and streamed live on AHLTV, with select games on TSN 1290.