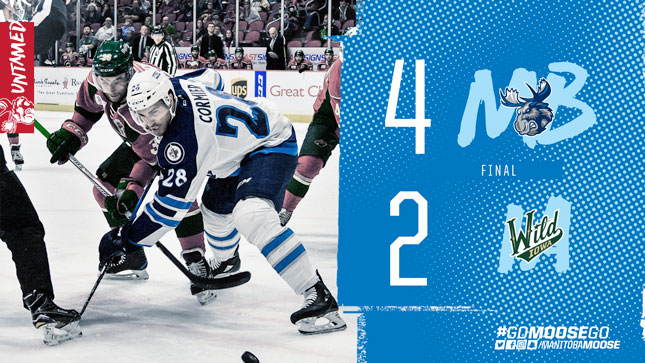 Game Story
The Manitoba Moose (3-3-0-0) and Iowa Wild (2-4-0-0) tangled for the second time in as many nights to wrap up their two game set.  It only took 43 seconds for the Moose to open the scoring.  Mike Sgarbossa slid the puck to Peter Stoykewych, whose slap shot from the point was redirected by Buddy Robinson and into the Wild net.  The lead didn’t last long as Kyle Rau sniped a tying goal off a two-on-one rush, 3:24 into the period.  Despite the quick start, the scoring stopped there with the teams combining for just nine shots in the period and exiting the frame tied 1-1.

After picking up his first AHL point with an assist on Friday night, Mason Appleton scored his first AHL goal, a power play marker 6:54 into the second, to put the Moose back out in front.  JC Lipon expanded the lead when he kept the puck on a two-on-one before popping the water bottle with a wrist shot 12:53 into the frame.  From there the Moose penalty kill took centre stage.  Manitoba found itself on the kill for four minutes, including a full two minutes down five-on-three, but the Moose defenders held back the Iowa push to maintain a 3-1 lead after 40 minutes.

The Moose held their two goal advantage until late in the third.  With the Wild on a four minute power play, this one due to a high-sticking double minor, Colton Beck cashed in on a wrister from the slot to cut the lead down to one with 4:49 left.  Iowa nearly tied the contest on a couple of point blank chances, but Michael Hutchinson came up with two key stops to keep Manitoba in front.  The Wild called Niklas Svedberg to the bench with just under 90 seconds left in the game, but Buddy Robinson set up JC Lipon for the empty net tally.  Lipon’s second of the night sealed a 4-2 Moose victory.

What’s Next?
The Moose and travel to Chicago where they have an early call time for an 11 a.m. CT game on Wednesday.  Tune into the final game of the road swing on TSN 1290 or moosehockey.com/listenlive starting 15 minutes before puck drop.