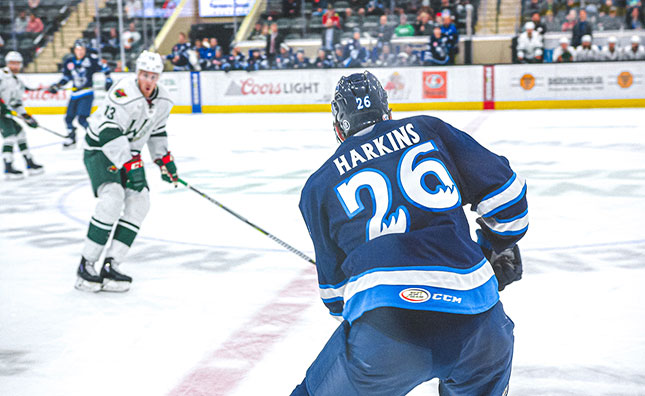 Game Story
The Manitoba Moose (1-1-0) won their second and final preseason game against the Iowa Wild (1-1-0) on Saturday afternoon at Ralph Engelstad Arena in Grand Forks, N.D. In light of Manitoba’s loss to the Wild in last night’s matchup, the Moose were looking to make a statement and even up the games. The Wild were the first to get on the board and gain the advantage. An initial save from Griffen Outhouse looked promising, however Gabriel Gagne found the rebound and the puck slid past the netminder. The Moose took back-to-back penalties, but the Moose penalty kill stayed strong and kept the score 1-0 heading into the second.

Manitoba came out strong in the second period looking to get on the board. With ten minutes gone in the frame Andrei Chibisov was able to find the back of the net for the Moose with deflection of Logan Stanley’s shot at the blue line to tie the game. The goal gave the Moose momentum and they found the net again three minutes later on the power play. The Moose got the go-ahead goal with a one timer from Michael Spacek assisted by Seth Griffith and Cameron Schilling.

Tensions rose as the Wild looked to even up the game resulting in Ryan White and Turner Ottenbreit dropping the gloves midway through the third period. A breakaway from Brandon Duhaime looked promising for the Wild, however Outhouse continued to impress and denied his attempt. Manitoba added to its lead as Kristian Reichel scored an empty net tally with less than a minute remaining in the 3-1 Moose victory over the Wild.

What’s Next?
The Moose play their first game of the 2019-20 season against the Rampage in San Antonio on Friday, Oct. 4. Tune in to the action with a free preview of AHLTV or listen at moosehockey.com/listenlive starting 15 minutes before puck drop.