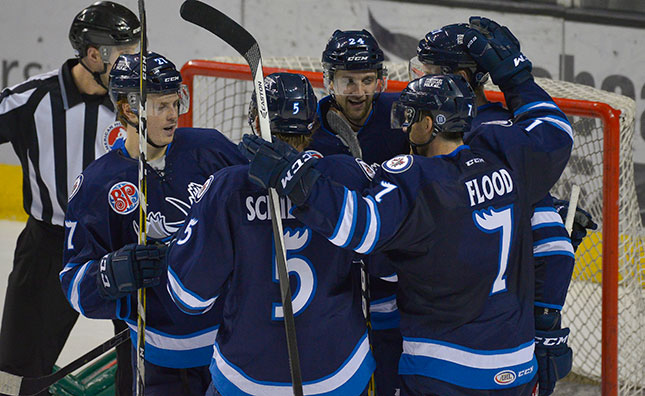 The Manitoba Moose (1-0-0-0) and Iowa Wild (0-1-0-0) opened the pre-season at the Ralph Engelstad Arena in Grand Forks, ND on Friday night.  The teams went through a feeling out process in the early going, getting into their first game action.  Michael Hutchinson and Adam Vay kept the squads off the board, making nine and 11 saves respectively in the first.

The second frame saw plenty of power play time for both sides.  The Moose were unable to capitalize on their chances, despite a couple of close calls.  Special teams favoured the Wild in the period with Iowa scoring their lone goal on the man advantage.  Mario Lucia picked his spot on the short side to put the Wild in front with less than two minutes to go in the frame.  That tally held through the final couple minutes and the Moose went to the room trailing by one.

Manitoba came out with early pressure in the third.  That led to Brody Sutter evening the score when he found twine off a spinning shot from the slot 8:37 into the period.  The Wild came back just under five minutes later when Mario Lucia broke in alone and slide home his second of the night to put Iowa in front, 2-1, with 6:45 to go.  In the spirit of trading goals, Brody Sutter found a late equalizer.  With Hutchinson on the bench for the extra attacker, Sutter deflected a Cameron Schilling shot past Vay to tie the game with 2:22 remaining.  With overtime looming, another Schilling shot resulted in success for the Moose.  The veteran defender’s attempt rebounded to Buddy Robinson and the big forward used the opportunity to lift Manitoba to a 3-2 advantage with just 85 seconds left.  The Moose held the lead and came away with a 3-2 victory.

What’s Next?
The Moose and Wild head down the highway to Fargo where they renew hostilities at 7 p.m. at Scheels Arena.  Tickets are available at scheelsarena.com.

The 2017-18 season isn’t far away! Be sure to head to moosehockey.com/tickets for information on all ticket options for the upcoming season.  The Moose open their home schedule Friday, October 13.