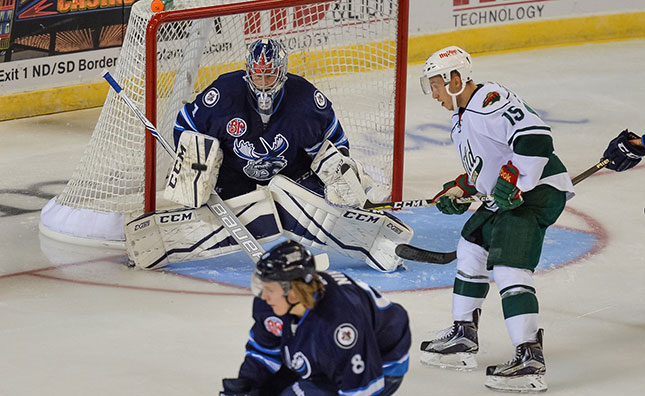 Game Story
The Manitoba Moose (1-1-0-0) and Iowa Wild (1-1-0-0) met for the second straight night on Saturday, but changed venues to Scheels Arena in Fargo, ND. In a similar situation to the night before, the teams battled to a scoreless draw through one period.  Eric Comrie turned aside 12 shots in his pre-season debut while Adam Vay made seven saves for the Wild.

Same as the night before, it would be Iowa to open the scoring off the stick of Mario Lucia.  The second-year pro found open ice on an odd-man rush and used it to beat Comrie, 5:17 into the frame.  Less than a minute later, a scramble in front of the Moose net saw Chase Lang cash in the loose puck for a 2-0 Wild lead.  The Moose put together a push late in the period, but couldn’t cut into the lead, heading to the break down two.

After controlling the third period on Friday night, the Moose went to work in the final frame tonight looking to erase their two-goal deficit.  Manitoba outshot Iowa 11-4 in the period, but didn’t solve Iowa netminder Christian Frey until there were 34 seconds remaining on the clock.  With plenty of traffic in front of the Wild net, Chase De Leo sniped one coming in from the faceoff circle to put the Moose within reach.  Manitoba came close again in the dying seconds, but were held back from another late tying marker.  The Wild picked up the 2-1 win to split the weekend pre-season set.

What’s Next?
The Moose open the 2017-18 Regular Season in Grand Rapids when they face off against the defending league-champion Griffins on Friday, Oct. 6.  Tune in to the action on TSN 1290 and moosehockey.com.

The 2017-18 season isn’t far away! Be sure to head to moosehockey.com/tickets for information on all ticket options for the upcoming season.  The Moose open their home schedule Friday, October 13.