Reign over Moose in California 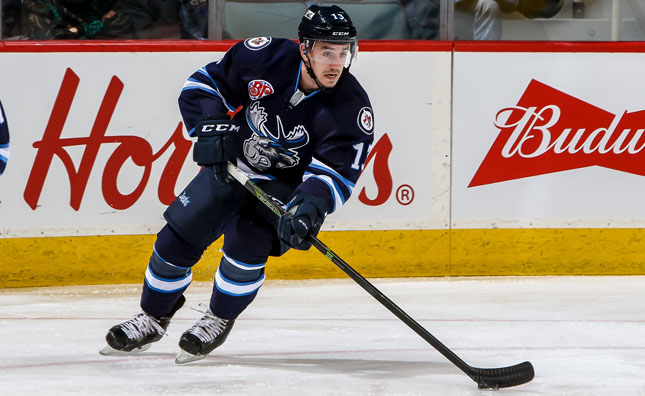 The Ontario Reign proved again why they were last year’s Calder Cup Champions (as the Manchester Monarchs) and the top team in the Pacific Division this season on Wednesday night at the Citizens Business Bank Arena in Ontario, California.

The Moose had a great start with a couple California natives in Chase De Leo and Eric Comrie making impacts early in each of their first professional game’s in their home state along with many friends and family in attendance.

In the first period, De Leo worked hard in the neutral zone to create a turnover and on the dump-in the La Mirada native created havoc around the Reign net which led to a backhand goal for Nic Petan.

The goal was Petan’s third goal of the season and he has now recorded 16 points in 24 games with the Moose. De Leo’s assist on the goal ties him with Brenden Kichton for the team lead with 21 points.

De Leo is also now tied for 17th in the AHL in rookie scoring with 11 goals and 10 assists on the season.

Comrie was also off to a great start in the game and shortly after Manitoba’s first goal he stopped Reign forward Justin Auger on a penalty shot.

But it was the Reign who kept coming.

Ontario tied the game with under four minutes left in the first period on a goal from Valentin Zykov.

In the second period a quick flurry saw the Reign score goals from Michael Mersch and Ryan Horvat just 58 seconds apart to pull away from the Moose.

Peter Budaj picked up the win in net for Ontario with 23 saves while Eric Comrie was strong again for the Moose allowing three goals on 30 shots.

Forward Thomas Raffl and defenceman Jay Harrison both made their returns to the Moose lineup after each has been out since mid-December due to injury.

These two teams will face each other once more in the regular season when the Moose wrap up this current road trip on Jan. 30.

The Moose will be back in action this Friday night, Jan. 22 when they play the first of two meetings against the Stockton Heat at 9:30 p.m. CT at the Stockton Arena.