Four Assigned to Moose Including Two First Round Picks 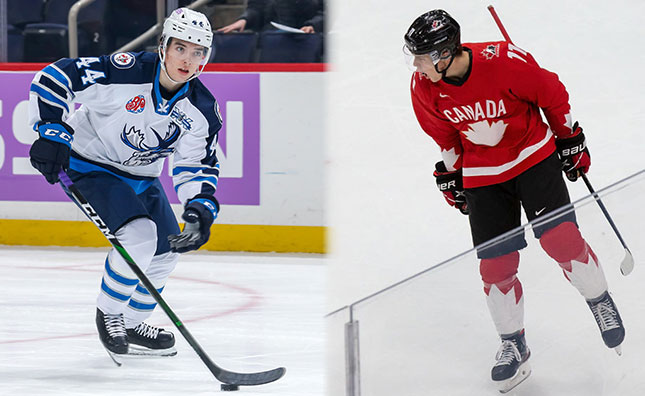 The Winnipeg Jets announced today the team has assigned defencemen Ville Heinola and Nelson Nogier and forwards Cole Perfetti and C.J. Suess to the Manitoba Moose. Heinola (2019) and Perfetti (2020) are the previous two first round picks of the Jets.

Heinola made his AHL debut during the 2019-20 season with the Moose, recording one assist in three games with the club. The Honkajoki, Fin. product also tallied five points (1G, 4A) in eight games with the Jets and seven assists in 29 games with Lukko Rauma of the SM-Liiga during the 2019-20 campaign. This season, Heinola racked up 14 points (1G, 13A) in just 19 games with Lukko Rauma. He also captured a bronze medal with Team Finland, and was named a tournament all-star, at the 2021 World Junior Championship in Edmonton.

Perfetti was the 10th overall selection of the 2020 NHL Draft. His selection followed a season that saw the forward finish second in OHL scoring last season with 111 points (37G, 74A) in 61 games with the Saginaw Spirit. The product of Whitby, Ont. was also second in the OHL with 74 assists. He was selected to the OHL’s Second All-Star Team and as the OHL and CHL’s Scholastic Player of the Year. In 2018-19, Perfetti led OHL rookies with 37 goals and 74 points, as he was named to the OHL’s All-Rookie team. In two OHL seasons, he has tallied 185 points (74G, 111A) in 124 games. He was also a participant at the 2021 World Junior Championship, claiming a silver medal with Team Canada at the event.

Nogier and Suess are familiar faces to the Moose who return to the club after re-signing with the Jets in the off-season.