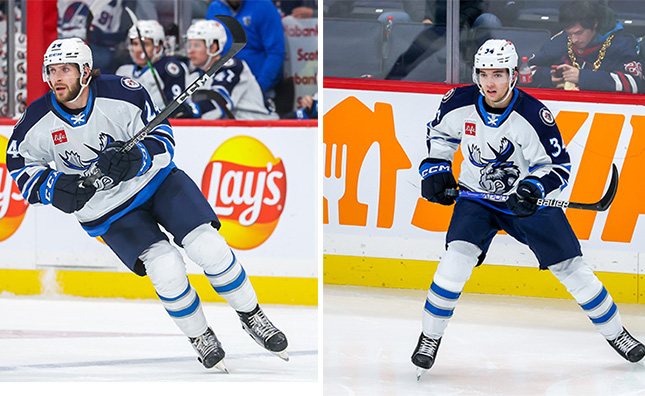 Heinola, 21, has 11 points (1G, 10A) in 14 games with the Moose this season. The Honkajoki, Finland product sits fourth on the team in scoring among defencemen and paces the club with a plus-17 rating. Heinola has 49 points (10G, 39A) in 77 AHL contests, all with the Moose, in his career. Heinola has suited up in eight games with Winnipeg this season and tallied one assist. Over the course of his career, the defender has appeared in 33 NHL games with the Jets, tallying 11 points (1G, 10A). Heinola was a first round pick (20th overall) of the Jets in the 2019 NHL Draft.

Harkins, 25, racked up 12 points (7G, 5A) in nine games with the Moose this season. The forward is also on a nine-game AHL point streak, tallying at least one point in every game played with Manitoba. Harkins also has 22 contests with the Jets under his belt in 2022-23 and registered five points (3G, 2A) along with a plus-four rating. The North Vancouver, B.C. product has suited up in 154 NHL games and registered 27 points (13G, 14A) during that span. Harkins also has 165 career AHL games under his belt, all with the Moose. The forward has tallied 94 points (34G, 60A) over the course of those outings. He was named Manitoba’s Most Valuable Player for the 2019-20 campaign and participated in the 2020 AHL All-Star Classic.

Manitoba returns home to clash with the Chicago Wolves at Canada Life Centre on Tuesday, Jan. 17. Puck drop is slated for 7 p.m. CT. Tickets to all upcoming Moose home games are available at MooseHockey.com/TICKETS.