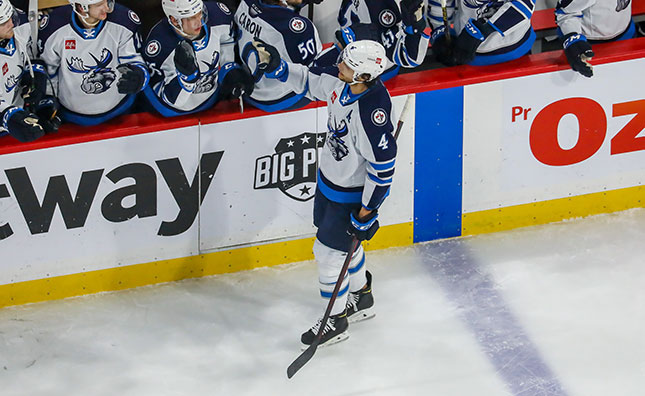 Kovacevic, 24, has 14 points (7G, 7A) in 32 games with the Moose this season. The Grimsby, Ont. product has appeared in 107 AHL games with Manitoba and recorded 42 points (14G, 28A) in those contests. Kovacevic’s seven goals on the season are currently tied for the AHL lead among defencemen. The blueliner was a third round selection, 74thth overall, of the Jets in the 2017 NHL Draft.

Eyssimont, 25, has 14 points (6G, 8A) in 25 games with the Moose this season. The Littleton, Colo. product has appeared in 187 career AHL games split between the Ontario Reign and Moose. Eyssimont has 80 points (37G, 43A) in those contests. The winger was a fifth round pick, 142nd overall, of the Los Angeles Kings in the 2016 NHL Draft.

Holm, 23, holds a 6-2-1 record in nine games with the Moose this season. The Ljungby, Sweden product is in the midst of his first AHL campaign and features a 2.08 goals-against average to go along with a .908 save percentage. The netminder also registered his first AHL shutout on Dec. 5 in Belleville. Holm was a sixth round selection, 167th overall, of the Jets in the 2017 NHL Draft.

The Moose face the Abbotsford Canucks for the first time ever on Saturday, Jan. 29. Puck drop is scheduled for 2 p.m. CT at Canada Life Centre. Extremely limited tickets are available at MooseHockey.com. You can catch the game on CJOB.com/sports, the Manitoba Moose App and AHLTV.