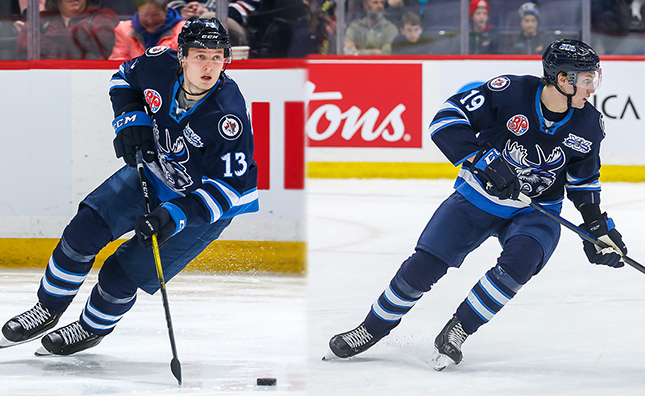 Gustafsson, 20, has played four games for the Jets this season. He also played 16 games with Tingsryds AIF (HockeyAllsvenskan) where he recorded 17 points (7G, 10A). The Tingsryd, Sweden product notched seven points (2G, 5A) in 13 games with the Moose in 2019-20. Gustafsson finished the AHL campaign with points in four consecutive games, tallying six points (1G, 5A) over that span. He was a second round pick, 60th overall, of the Jets in the 2018 NHL Draft.

Vesalainen, 21, has appeared in eight games with the Winnipeg Jets this season while recording one assist. Prior to the NHL season beginning, Vesalainen played in 10 games with HPK Hameenlinna (SM-Liiga) while posting eight points (4G, 4A). The Helsinki, Finland native posted 30 points (12G, 18A) in 60 games with the Moose during the 2019-20 season. Vesalainen was a first round pick, 24th overall, of the Jets in the 2017 NHL Draft.

The Moose roster now features five players selected by the Jets in the first two rounds of the NHL Draft. That group includes the Jets first pick of each of the last four drafts.

The Moose hit the ice Friday night to take on the Belleville Senators at Canadian Tire Centre in Ottawa, Ont. Tune in on CJOB.com/sports, MooseHockey.com/LISTENLIVE or watch with a subscription to AHLTV. Coverage begins at 5:45 p.m. CT with puck drop at 6 p.m. CT.