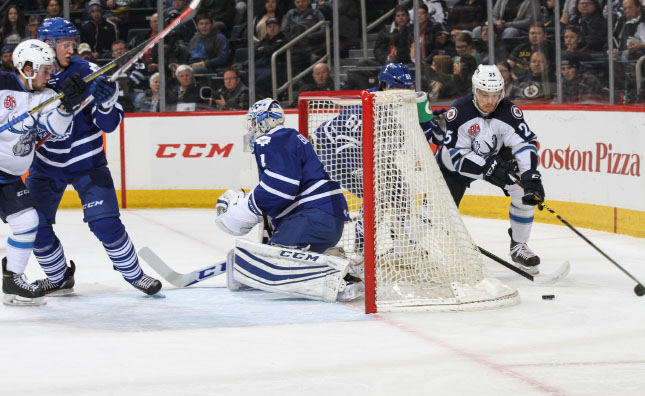 The Manitoba Moose played two solid periods against the Toronto Marlies on Thursday night at the MTS Centre, but the middle frame was Manitoba’s undoing.

After trailing by just a goal after the first, the Moose saw the AHL’s top team in the standings, the Marlies score four unanswered goals in the second as the game slipped away.

In the third, the Moose fought back with goals from Nic Petan and Jiri Fronk but a late empty net goal from Zach Hyman gave the Marlies a 6-2 victory.

Fronk scored his fifth goal of the season. All five of his goals have come in the 10 games he has played at the MTS Centre this season.

Antoine Bibeau picked up the win in the Marlies net making 23 saves.

Manitoba goaltender Eric Comrie allowed four goals on 21 shots before he was replaced by Jussi Olkinuora who stopped seven of the eight shots he faced the rest of the game.

The Moose will play the Marlies for the eighth and final time during the regular season in their next game on Saturday, Feb. 6 at the MTS Centre at 2 p.m.