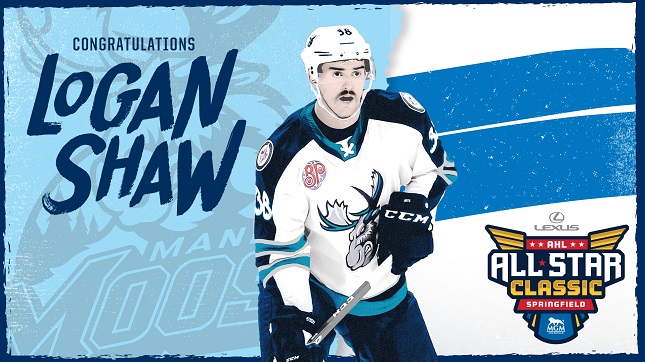 The Manitoba Moose Hockey Club, in conjunction with the American Hockey League, announced today forward Logan Shaw has been named to the 2019 Lexus AHL All-Star Classic presented by MGM Springfield.  Shaw takes the place of Mason Appleton, who is currently playing in the NHL with the Winnipeg Jets.

The 2019 AHL All-Star Skills Competition on Jan. 27 (6 p.m. CT) will pit the All-Stars from the two Eastern Conference divisions against those from the two Western Conference divisions in seven skills events.  In the 2019 AHL All-Star Challenge on Jan. 28 (6 p.m. CT), the four teams will participate in a 3-on-3, round-robin tournament featuring six games of 10 minutes each. The two teams with the best records at the end of the round-robin will face off for the championship, a six-minute, 3-on-3 game.  Both events will air on Sportsnet ONE and Sportsnet NOW in Canada, and the NHL Network in the United States.

Since 1995, more than 94 per cent of All-Star Classic participants have gone on to compete in the National Hockey League.

Logan Shaw and the Moose host the San Antonio Rampage for a pair of games this weekend starting with Grassroots Hockey Day Saturday at 2 p.m CT.  Tickets for that contest, as well as Star Wars Day on Sunday (2 p.m. CT), are available at moosehockey.com/tickets.