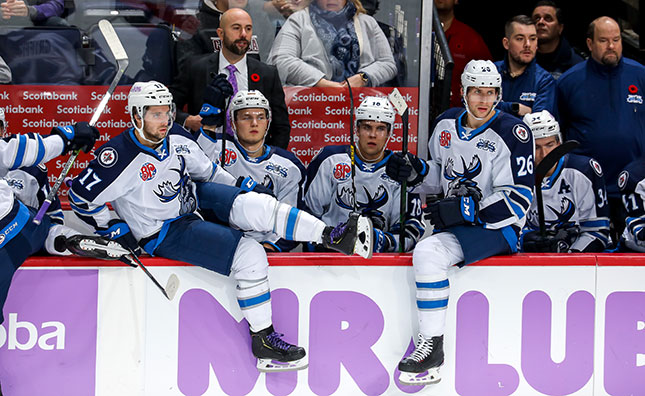 Our second feature looks at not one, but two games that saw the emergence of an AHL All-Star and a great performance from one of the team’s veterans.

Okay, so it didn’t take me long to break the rules and put two games together. That said, this really is a story that plays out over the two contests and took place in less than 24 hours. So can you really blame me? It’s no secret the Moose had a rough start to the season. After splitting their opening weekend down in Texas, Manitoba dropped six straight games to fall to a 1-7-0 record. Tight losses against Toronto, Iowa and Grand Rapids were games the Moose were close to picking up points, but were unable to force extra time. Following a 4-0 shutout loss to the Chicago Wolves, the Moose had a week to prepare for a two-game home stand against the Griffins.

During their losing streak, the Moose scored a total of nine goals in six games. They broke out of both slumps in a big way over the weekend, scoring a combined 12 goals in 5-3 and 7-4 victories over the Griffins.

Forward Jansen Harkins came into the game with three points (2G, 1A) in eight games on the season. Nobody could have expected what came next. With the Moose trailing 1-0 in the first, Harkins drove low into the offensive zone before swinging the puck back to Sami Niku who zipped home a tying strike. Matt Puempel set the Griffins back out in front, but the Moose had another answer. Harkins drew attention at the Grand Rapids blueline before sliding the puck into the middle of the ice for Seth Griffith who delivered one of the top highlights of Manitoba’s season to tie the contest 2-2.

The Moose pulled in front late in the second period after Harkins dished the puck to Cameron Schilling whose shot turned into a rebound goal for JC Lipon.

Manitoba’s veteran struck for his second straight power play goal just under four minutes into the third. Skyler McKenzie and Harkins combined to get Lipon the puck in front for a quick snap shot goal. Grand Rapids inched back within a goal a few minutes later and pumped 11 shots on goal in the third. The Griffins couldn’t find a tying marker, though, and Griffith notched his second of the game into an empty net. Once again… Harkins’ name found the scoresheet on the assist. The North Vancouver, B.C. product was in on all five Moose goals, recording a historic five-assist game.

But the weekend wasn’t over. Harkins and Griffith weren’t done yet.

The veteran of the duo opened the scoring five minutes into the contest. Andrei Chibisov settled down a rolling puck and dished a nifty little backhand pass over to Griffith who finished off the play on the back door. Manitoba extended its lead three minutes later when Leon Gawanke set up Schilling with a gorgeous cross-ice feed. The visitors would get on the board before the end of the period courtesy of Ryan Kuffner.

The Moose pushed their lead to three goals early in the second as Harkins remained red hot, stealing a puck in front of the Grand Rapids net and depositing it in the goal. Griffith kept his roll going with his second goal and third point of the afternoon by cashing in another sweet feed from Chibisov for a power play goal. The Griffins weren’t about to go quietly though. Matt Ford and Chris Terry each scored 54 seconds apart in the late stages of the second frame to cut the lead to 4-3 heading to the third. 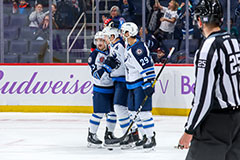 Terry was a force in the game, scoring his second goal of the contest 5:31 into the third to tie the game 4-4. The veteran forward recorded six points (3G, 3A) over the weekend, but it wouldn’t be enough. The Moose regained the lead as Schilling struck for his second of the game by closing out a setup from Ville Heinola and Harkins. The tally would hold up as the game-winner as Sami Niku potted an empty netter and Griffith finished off the hat trick into the empty net as well for a 7-4 victory.

It was the first set of back-to-back wins for the Moose on the season and sparked a 9-1-0 run deep into the month of November.

Jansen Harkins had an incredible weekend, recording eight points (1G, 7A) which led to his being named the CCM/AHL Player of the Week. The five assists on Saturday were a franchise AHL record and tied the overall IHL/AHL mark set by Brett Hauer back in 1999-00. It was the beginning of a ridiculous month for Harkins that earned him CCM/AHL Player of the Month honours after recording 24 points (4G, 20A) in just 15 games. On Dec. 18, Harkins earned a recall to the Winnipeg Jets and only returned to the AHL to participate in the 2020 AHL All-Star Classic.

Seth Griffith enjoyed nearly as dominant of a weekend as Harkins, notching five goals and six points in the two contests. It wasn’t the only weekend Griffith went off, either. The veteran forward racked five goals over a second weekend on Dec. 21 and 22 against San Antonio.

Even with Harkins and Griffith lighting the scoresheet on fire, they needed some clutch goal-scoring from JC Lipon and Cameron Schilling. Lipon scored back-to-back goals on Saturday to provide the eventual game-winner. Schilling scored twice, including the winner, on Sunday as part of a four-point (2G, 2A) weekend.

After a weekend that saw the Moose and Griffins combine for 19 goals, my next feature focuses in on a game that saw just one goal on the board. A goaltending duel and a third period hero provided a thrilling matchup between the Moose and the league’s top team at Bell MTS Place in February.