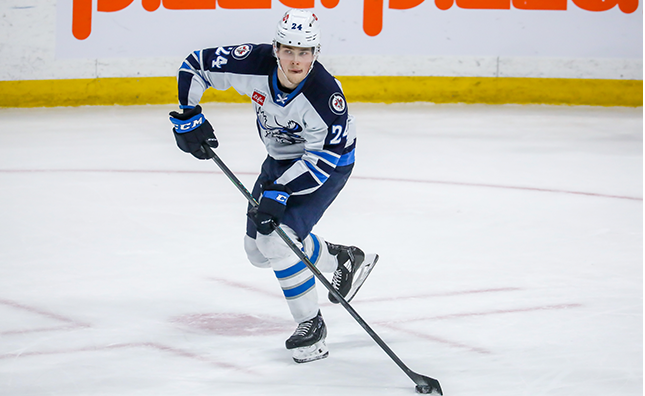 The road to the NHL can take many directions for prospects. Development is a partnership between prospects and the organization with the goal of the players someday becoming productive members of the NHL roster. Many players are accustomed to making a literal journey in order to continue on the development path.

In the case of Henri Nikkanen, that means hopping on a plane from Finland and making his way overseas. As Nikkanen landed in North America to play in Winnipeg for the first time this past April, the next chapter of his career was just getting started.

A Taste of the Action 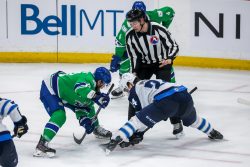 Nikkanen spent the majority of the year in Finland playing for Liiga’s Lahden Pelicans. The forward tallied 12 points (7G, 5A) in 60 regular season games with the squad. He also made his way into three post-season games with the team. With the Pelicans falling in the best of two wild-card round, Nikkanen’s season in Finland came to an end.

The next chapter in Nikkanen’s career began almost immediately as he signed a three-year, entry-level contract with the NHL’s Winnipeg Jets on April 11. In order to get the pivot comfortable in the system, Nikkanen also signed a professional tryout contract with the Manitoba Moose for the remainder of the 2021-22 season. He brought with him 37 points (16G, 21A) in 143 Liiga games split between Jukurit and the aforementioned Pelicans dating back to the 2018-19 season.

Nikkanen made his AHL debut April 24 in Milwaukee against the Admirals. “I gotta say it’s a whole different game than back home,” noted Nikkanen after the contest. “The size of the rink  is a lot different. Situations come a lot quicker, the offensive zones, like the corners, are a lot smaller. That means more battling down there. I have to say I like it. I like battling down low. It’s more intense. I feel it’s good for me and it’s nice to be playing there.”

Nice play by Henri Nikkanen (2019 4th) who gets it over to Nicholas Jones who has the best chance of the middle frame. Manitoba with a 4-0 shot edge early in the 2nd. pic.twitter.com/ZJYmUXqgT0

The Mikkeli, Finland product went on to suit up in the final four games of the Moose regular season against Texas and Abbotsford respectively. The forward ended his brief tenure with four shots on goal and a plus-two rating through the handful of contests. Nikkanen also had the chance to to feel the pressures of the Calder Cup Playoffs, suiting up for one post-season game. He made it into Game 2 against Milwaukee on May 7 and recorded one shot on goal.

An Eye on the Future 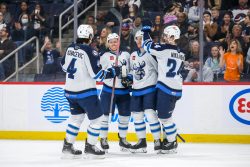 While having the chance to learn and get into a handful of games with the Moose was invaluable experience for the young centre, Nikkanen has a plan in mind for the summer in order to come fully prepared for the 22-23 season. It starts with taking some down time to relax and mentally reset.

“Its been a great summer so far,” said Nikkanen in a recent interview with MooseTV’s Austin Siragusa.  “Its been a long time since I’ve had some free time. Last summer I was spending time with the Finnish army so its been nice to just take a couple breaths and not think about anything too much and just enjoy the Finnish summer. It has been nice.”

As with most prospects, Nikkanen will try to gain an edge this summer as training camp rapidly approaches in the coming months.

“At the moment my main focus is in the gym to get my body working. To get more power and explosiveness and stuff like that,” remarked Nikkanen. “I’ll get more focused on the ice at the end of the summer. On there it will be making decisions a little quicker, making self quicker as well. Nothing huge, but those small things that are going to give me the next step.”

With the NHL Draft coming up on July 7 and 8, the Winnipeg Jets prepare to select the next crop of players to bolster the prospect pool. Nikkanen was in this position a few years ago. The forward heard his name called by the Jets in the fourth round (113th overall) of the 2019 NHL Draft. It was a memorable experience for the young Finn, who was able to celebrate his selection with family and friends.

“I remember being home with my parents and looking at it from the TV while sitting on the couch,” remembered Nikkanen.  “Then actually seeing my name come up on the board before getting any messages. It was 10 seconds later that I got a message and a call right away. It was nice and of course it makes it even more special to share it with family and friends.”