The Manitoba Moose, in conjunction with the American Hockey League, revealed the 2021-22 regular season schedule.

The Moose open their 72-game schedule on Oct. 16 in Toronto against the Marlies (Toronto) before returning home to Canada Life Centre on Oct. 22 for their home opener versus with the Grand Rapids Griffins (Detroit). 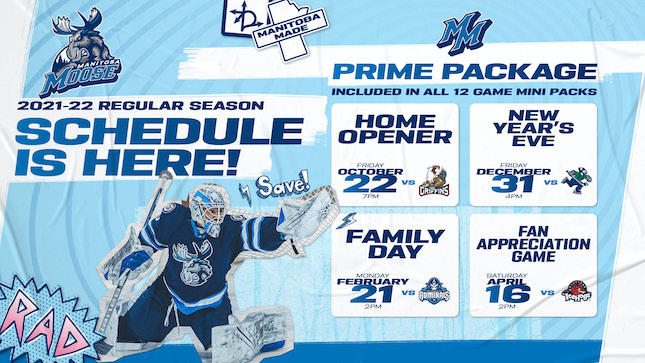 With their return to the Central Division, familiar foes appear on the Moose docket accounting for 56 of the team’s games. In addition to Grand Rapids, Manitoba faces off against the Chicago Wolves (Carolina), Iowa Wild (Minnesota), Milwaukee Admirals (Nashville), Rockford IceHogs (Chicago) and Texas Stars (Dallas).

The Moose play 16 of their outings against Canadian opponents. In addition to Toronto, Manitoba takes on the Belleville Senators (Ottawa) and Laval Rocket (Montreal) from the North Division. The Moose battle the newly minted Abbotsford Canucks (Vancouver) for the first time on Dec. 30 at Canada Life Centre. 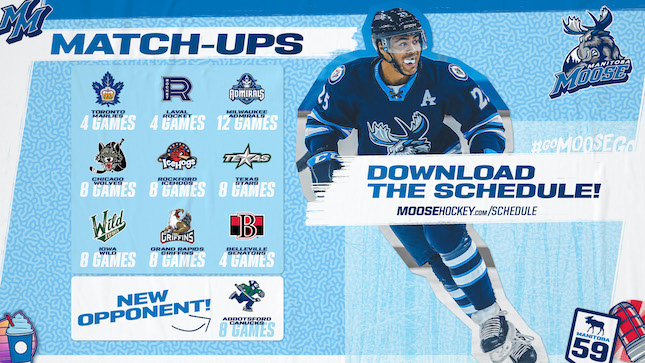 This season’s mini-pack offerings include:

Rivalry: The Rivalry Mini Pack is full of weekend matchups against our Central Division opponents!

Canadiana: The Canadiana Mini Pack is the perfect way to see the Moose battle it out with all of the visiting teams from North of the border.