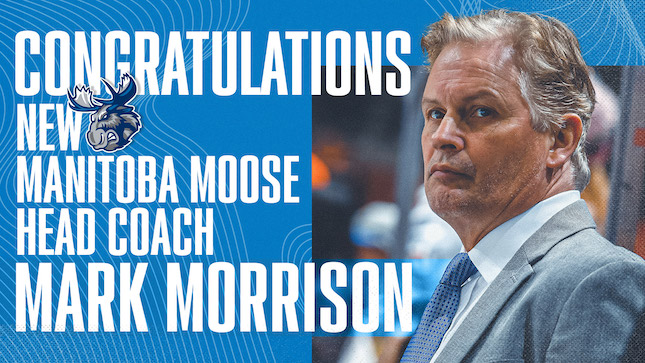 The Winnipeg Jets, in conjunction with the Manitoba Moose, are proud to announce Mark Morrison as head coach of the Moose.

Morrison, 58, is the ninth head coach in franchise history. The Delta, B.C. product spent the past four seasons as an assistant coach with the Anaheim Ducks. During his time with Anaheim, the club recorded a 125-125-41 mark over 291 games.

Prior to his time working in the NHL, Morrison was a part of the Winnipeg Jets organization as an assistant coach in the AHL with the St. John’s IceCaps and then Manitoba Moose. He held the position for six seasons. During that time, the Moose/IceCaps posted a record of 208-195-28-25 while reaching the Eastern Conference Final in 2012 and Calder Cup Final in 2014. During his time with the Moose/IceCaps, Morrison worked with multiple current Winnipeg Jets players including Kyle Connor, Connor Hellebuyck, Adam Lowry and Josh Morrissey.

Morrison’s ties to the Moose go back to the 2006-07 season as head coach of Manitoba’s former ECHL affiliate, the Victoria Salmon Kings. He took over as head coach midway through the campaign and guided the team to a 173-133-3-24 record over more than four seasons.

Morrison enjoyed a near 20-year professional playing career. A former third round pick of the New York Rangers, he appeared in 10 games with the NHL club, tallying a goal and an assist. Morrison spent most of his career with the Fife Flyers in the United Kingdom. He played 12 seasons with Fife, totalling 809 points (377G, 432G) in 418 games. Morrison was a player-coach for 10 of his seasons in Fife and was named the coach of the year on three occasions and captured multiple championships. He also won the 1984 Adams Cup with the Central Hockey League’s Tulsa Oilers and an Italian Championship with HC Merano.

During a standout WHL career with the Victoria Cougars, Morrison posted 394 points (159G, 235A) in 244 games. He played in the 1981 Memorial Cup and was named the Canadian Hockey League’s Most Sportsmanlike Player. Morrison captured a gold medal with Team Canada at the 1982 World Junior Championship.