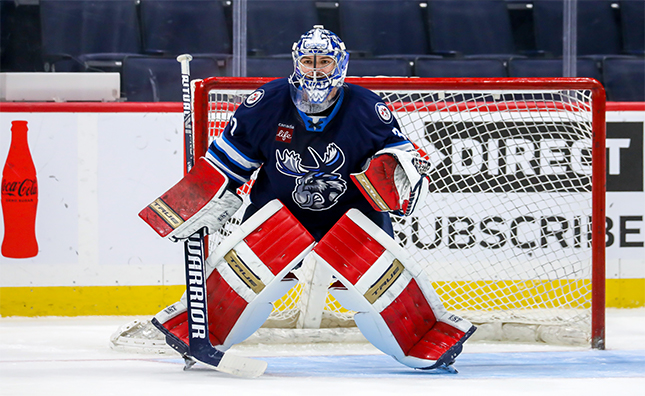 The Manitoba Moose Hockey Club announced today the team recalled goaltender Philippe Desrosiers from the Trois-Rivieres Lions of the ECHL.
Desrosiers, 26, has suited up in two games for the Lions this season and has a record of 1-1-0 to go along with a goals-against average of 1.01 and a .964 save percentage.
Desrosiers spent the 2020-21 season on the Florida Panthers’ taxi squad after appearing in 29 AHL games with Springfield in 2019-20. He ranked 12th in the AHL in save percentage (.916) and eighth in shots faced (1,037). A second-round pick by the Dallas Stars in the 2013 NHL Draft, Desrosiers has appeared in 72 AHL games over his six professional seasons with Springfield and Texas, going 33-28-3 with a 2.78 goals-against average, a .913 save percentage and two shutouts.

The Winnipeg Jets have also recalled goaltender Mikhail Berdin on an emergency basis from the Manitoba Moose while reassigning forward Kristian Vesalainen.

Berdin, 23, has suited up in six games for the Moose this season and has a record of 3-3-0  with a 2.69 goals-against average, a .893 save percentage and two shutouts.Vesalainen, 22, has one goal in his first eight games of the season with Winnipeg. The Helsinki, Finland, product appeared in six games with the Moose during the 2020-21 season and recorded five points (1G, 4A) in those contests.