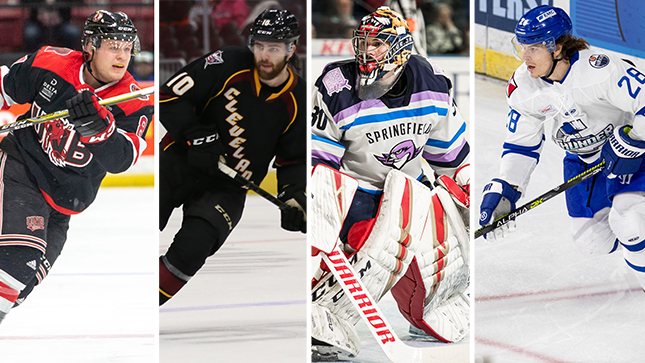 Polei, 25, posted six points (3G, 3A) in 15 games with the Cleveland Monsters during the 2020-21 season. The Wetaskiwin, Alta. product has 39 points (17G, 22A) in 120 career AHL games split between the Monsters, San Antonio Rampage and Bakersfield Condors. Prior to turning pro, the forward spent four seasons in the WHL split between the Saskatoon Blades and Red Deer Rebels where he recorded 131 points (72G, 59A) in 242 career WHL games. Polei played in the 2016 Memorial Cup tournament with Red Deer, notching two goals in four games.

Desrosiers, 26, appeared in 29 games with the Springfield Thunderbirds during the 2019-20 season where he marked a 16-10-2 record alongside a 3.05 goals-against average and .916 save percentage. The Saint-Hyacinthe, Que. product spent the entirety of the 2020-21 season assigned to the Florida Panthers Taxi Squad. Desrosiers split his AHL career between the Thunderbirds and Texas Stars where he suited up for 72 career AHL contests, posting a 33-28-3 record with a 2.78 goals-against average and .913 save percentage. Prior to turning pro, Desrosiers appeared in 142 career QMJHL contests with the Rimouski Oceanic and marked a 83-33-15 record alongside a 2.74 goals-against average and .903 save percentage. Notably during his QMJHL career, Desrosiers was awarded the Defensive Rookie of the Year in 2012-13, the CHL Goaltender of the Year in 2014-15 and also led the club to the 2015 QMJHL Championship. The netminder also won a gold medal with Team Canada at the U18 World Championships where he posted the tournament’s best goals-against average. Desrosiers was originally selected by the Dallas Stars in the second round (54th overall) of the 2013 NHL Draft.

Pomerleau, 25, appeared in one game with the Laval Rocket during the 2020-21 season. Prior to making his pro debut, Pomerleau spent three seasons at the University of New Brunswick (USports) where he recorded 33 points (6G, 27A) in 80 career games. Pomerleau captured the USports University Cup in 2019 with UNB and won back-to-back Atlantic University Sport conference championships in 2018 and 2019. The Riviere-du-Loup, Que. product played his junior career with the Victoriaville Tigres (QMJHL) where he posted 85 points (12G, 73A) in 249 career QMJHL games.

Stewart, 23, racked up 36 points (6G, 30A) in 53 games with the Wichita Thunder (ECHL) during the 2020-21 campaign. The Portage la Prairie, Man. product tied for fifth in assists among all ECHL defenders and was named Wichita’s defenceman of the year. Stewart spent his collegiate career with the University of Nebraska Omaha where he recorded 45 points (7G, 38A) in 130 career NCAA games. Stewart played his junior hockey with the MJHL’s Portage Terriers where he tallied 28 points (8G, 20A) in 75 career games. He was a seventh round pick (188th overall) of the Arizona Coyotes at the 2016 NHL Draft.