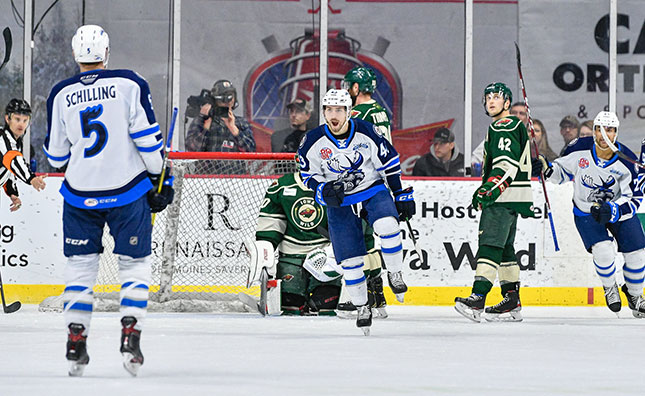 With the Moose celebrating their 20th Season during the 2019-20 campaign, we’ve spent plenty of time looking back on the past two decades of Moose hockey in Manitoba. With the season in the books it’s a good chance to look back on some of the big moments in the near past. This series focuses in on some of the exciting action from the 2019-20 Moose season.

You can’t win every game on the schedule. That said, even in a loss there things you can take from defeat. On January 25, the Moose showed a ton of resiliency to turn what looked like a forgone conclusion in Des Moines into a furious battle to the finish.

The Moose wrapped up a four-game home stand against Belleville and Laval, earning a split against the two Canadian teams. Manitoba cruised to a 5-1 victory over the Rocket on Sunday and had most of the week to prepare for a quick trip down to Iowa. The two games against the Wild led the Moose to the all-star break and they were looking to pick up some valuable points. The first night saw Manitoba outshoot Iowa 33-29, but fall 1-0 on Friday.  The teams clashed again the next evening.

The Moose recorded seven of the first eight shots on goal in the contest. That followed the trend from the night before when Manitoba racked up eight of the first 10 offerings. The Wild pushed back midway through the frame, though, and opened the scoring. With Iowa on the power play, Sam Anas fired a pass to the front of the net that redirected into the goal off a Manitoba defender. Mat Robson was stellar between the pipes for the Wild, turning away 13 Moose shots in the frame.

Iowa took over in the second period, outshooting the Moose by an 18-8 count. Eric Comrie was able to turn aside 16 of the chances, but the Wild tacked on two more goals. At the 10-minute 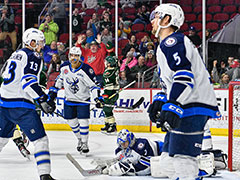 mark of the period, Gerry Mayhew streaked in off the wing and tallied his league-leading 30th of the season. Logan Shaw nearly got the Moose on the board less than a minute later, but Robson was there to make a lunging glove stop. With the Wild on their third power play of the game, the home side struck for a second time on the man advantage. Louis Belpidio’s point shot created a scramble in front that Will Bitten was happy to end by giving Iowa a 3-0 lead. With seconds left on the clock in the period, Michael Spacek centered for Andrei Chibisov who snapped the puck to the back of the Iowa net. Unfortunately for the Moose, Chibisov’s shot didn’t go in until after the horn signaling the end of the frame.

Despite trailing 3-0, the Moose got back on the attack in the third period. Manitoba outshot Iowa 15-5 in the final stanza and finally broke through. Making an early gamble, head coach Pascal Vincent called Comrie to the bench for the extra attacker with over eight minutes left. After regaining control of the puck following a blocked shot, Leon Gawanke worked the puck to Kristian Vesalainen. The Finnish forward snapped a pass cross-ice to JC Lipon who wired home a one-timer to get Manitoba in the goal column. With under three minutes to go in the contest and the extra attacker out again, Iowa’s Kyle Rau lifted a clearing attempt down the ice. Initially the puck looked to be heading well wide, but caught on edge and peeled back to the middle of the ice and into the Moose net. Trailing by three once more, with just 2:31 to go, the Moose didn’t go away quietly. 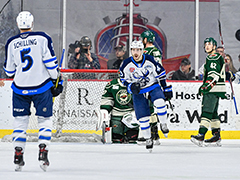 One minute after the empty net tally, Vesalainen called his own number and zipped a wrister past Robson to get Manitoba back within two with 90 seconds to go.The visitors continued to pour it on. With the extra attacker again on the ice, Cameron Schilling ripped a shot wide of the net, but C.J. Suess jammed it back to the front of the goal and Skyler McKenzie pounced to cut the deficit to just one. There were still 54 seconds left on the clock, but that was as close as the Moose would get. The valiant comeback attempt after trailing 3-0 into the back-half of the third, fell just short. Still, the Moose showed no shortage of willpower to nearly pull off the near impossible resurgence.

The Moose and Wild have put forward one of the most entertaining series this season. The teams have clashed six times, with four of the games decided by one goal and two more decided by two goals including empty net tallies.

Kristian Vesalainen was a driving force behind the late-game drive. The winger picked up a goal and an assist while recording four shots on goal in the contest.

Despite not scoring on the evening, the line of Andrei Chibisov, Michael Spacek and Kristian Reichel combined for a whopping 11 shots on goal. Given an extra second in the middle frame they could have started the comeback early on Chibisov’s near buzzer-beater.

Next week we’re heading back to November when the Moose were rolling into Belleville on a six-game winning streak and looking to make it seven in a row.