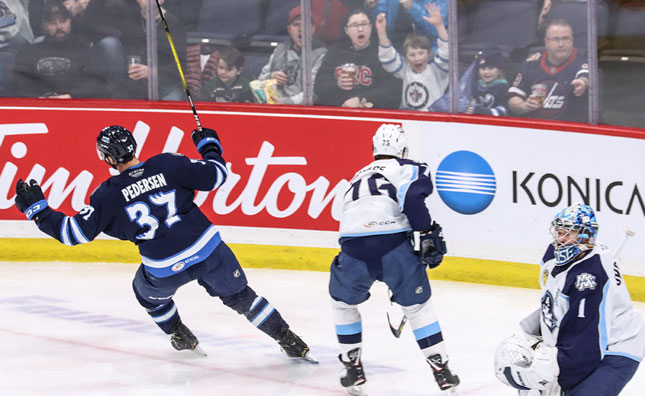 This week’s edition focuses in on a goaltender duel and late-game heroics as the Moose faced off against the league’s top team, the Milwaukee Admirals, on Feb. 15.

The Moose hit the final stages of a six-game home stand with a 1-3-0 record after dropping two straight games to the Rockford IceHogs. If Manitoba was going to salvage some more points out of the stand, they would have to come against the league-leading Milwaukee Admirals. The Moose were desperately fighting to get back in the playoff picture, while Milwaukee wanted to hold off the Iowa Wild. The Admirals had dropped three of four and Iowa was surging. With key points on the line the teams went to centre ice to drop the puck at Bell MTS Place.

It didn’t take long for one of the game’s key players to make his presence known. With the Admirals on the power play eight minutes into the contest, Eric Comrie came sliding across to snag an Eeli Tolvanen rip that threatened to open the scoring. The Moose goaltender was brilliant in the first, making 13 saves. His counterpart, Troy Grosenick, was just as solid while pulling in 10 Moose attempts. One shot did get behind Grosenick, but Jimmy Oligny’s offering from the point found iron instead of twine. With both goaltenders looking sharp, the teams went to the intermission in a scoreless draw.

Milwaukee snagged an early chance in the frame on a Tommy Novak steal, but the rookie forward’s try sounded the iron. The posts continued to ring throughout the period. JC Lipon spied Johnathan Kovacevic sneaking in off the line, but the Moose defender’s shot clanged away from the net after beating Grosenick.  Just moments later, Skyler McKenzie raced in off the wing one-on-one, but his shot ricocheted off the inside of the far post and skipped through the crease. Comrie continued to shine, adding another 13 saves to push his total up to 26 through 40 minutes of play.

After a pair of early third period chances for the Moose were thwarted, it seemed like this might be a game where nothing would find the back of the net. Just about seven minutes into the final frame, that finally changed. As the Moose gained possession in the defensive zone, Brent Pedersen went racing ahead. That burst allowed him to get outside defenceman Jeremy Davies 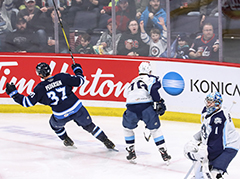 and accept a perfect stretch pass from Logan Stanley. Pedersen, who came into the contest with two goals on the season, turned on the jets and drove around Davies to get to the net. Once there, Pedersen showed off some great finish to lightly flick the up and under the crossbar to finally supply the game’s first goal.

There was still plenty of time remaining on the clock for the Admirals to tie the contest, but the Moose didn’t sit back. Kristian Vesalainen showed off some dazzling moves to get in on Grosenick twice, but the Finnish forward was thwarted by the post on one chance and Grosenick on the second. Following Vesalainen’s chances, Comrie was forced to make four more stops including opportunities from Tolvanen and reigning league-MVP Daniel Carr. The Moose netminder stayed firm, recording 35 saves to secure his first shutout of the season as Manitoba held on for the 1-0 victory.

Brent Pedersen’s third goal of the season also went down as his second game-winner of the campaign. In 36 games prior to the break, Pedersen has nine points (3G, 6A) for career highs in assists and points.

You can’t win every game, and not every memorable contest will end with two points. That’s the case for next week’s feature as the Moose showed great resilience and nearly pulled off an improbable comeback.