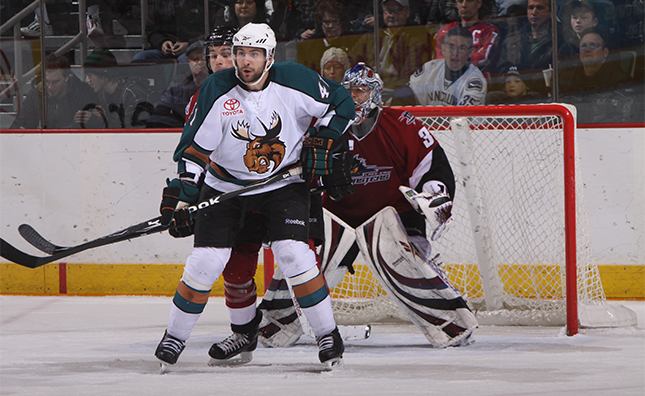 Guillaume Desbiens hung up his skates just three years ago. His choice to call it a career centred around his daughter, Olive.

“She was about to get started in kindergarten,” said Desbiens. “I had actually just signed a contract extension in England to be there for two years. I just didn’t feel like it was the normal life for a five-year-old to live. She needs to go to school, meet her friends, not have to worry about moving to a different town a year later. I don’t blame players that still play with kids and move them, that’s completely your decision. To me, I think I had a long enough of a career and see what I had to see, to know that it was time to put my priorities to her.”

Desbiens, who spent his final season playing in England with the Sheffield Steelers (EIHL), returned to North America in 2013 and accepted a position in Minneapolis with Polaris Inc. Just over a year later, the Alma, Que. product became a Sales and Technical Specialist with Husqvarna Construction. Although his professional hockey career was over, Desbiens didn’t stay away from the rink for long.

During the 2018 season, Desbiens took on the role as assistant coach for St. Louis Park Public School. He also stayed involved in the game as a scout for QMJHL club Armada de Blainville-Boisbriand.

“It’s been great drafting and seeing the other side of the metal,” said Desbiens. “I’ve always been used to being on the ice and getting looked at and judged by scouts. Now it’s kind of nice to turn it around and see what they’re seeing and understanding a little bit better what I may have done wrong or right in the past. It’s been a lot of fun.”

Desbiens learned valuable lessons from his coaches and leadership during his time on the ice. Those lessons were so prominent in his development that he integrated them into his own coaching style.

“You’re always looking for skills,” said Desbiens. “But you’re also looking intangibles and coachability. I’ve always kind of heard coaches and general managers harp about that like; ‘is he coachable? Is he a good attitude guy? Does he take feedback well?’ Now I realize how important that is. Because as a coach and a scout if a player isn’t doing something right, which is going to happen every game or every shift, but as long as they’re willing to learn and willing to listen to what you have to say. That’s the coachability part and you know that you can do something with that player and help them develop.”

Desbiens reminisced about his playing career and the journey that led him towards a spot on the Moose. During the final season of his entry-level contract with the Atlanta Thrashers, he won the Calder Cup with the Chicago Wolves. The following season, he was invited to the Vancouver Canucks Training Camp thus beginning his three-season tenure with the organization.

“I only have good memories,” said Desbiens of the Winnipeg organization. “Great memories actually. It really resurrected my career.”

Desbiens totalled 108 points (51G, 57A) during 198 games with the Moose. He spoke highly of the teammates he played with during his time with the Canucks and its AHL affiliate. Desbiens noted that the accountability and guidance he received from the veterans on the team not only had a positive affect on his play but also on his character.

“I was a big Quebec Nordiques fan,” Desbiens noted. “{Mike Keane} had played with the {Montreal Canadiens} for a while and won a Stanley Cup with them. I had to pinch myself in that I’m playing with Mike Keane right now. He was really good. Even in the later stages of his career he was a very productive player… by far the best player leader I’ve ever played with. I learned tons from him in terms of work ethic and how to be as a teammate.”

During his final campaign with the organization, Desbiens was tested with adversity. Just 12 games into 2010-11 season with the Canucks, Desbiens broke his hand in a fight. The injury required surgery that would sideline him for two months.

“It was very bittersweet that year…” said Desbiens. “I had spent a lot of time that summer working out and putting in the time. I had actually made the team in Vancouver out of training camp. It was the first time that I made an NHL team.”

Desbiens wouldn’t suit up again until Dec. 17 in Manitoba’s tilt against the Houston Aeros. During his return, he showed no signs of rust as he scored on his first shot of the game contributing to the club’s 5-3 victory.

Desbiens would not let the injury decide the fate of his career as he spent six more seasons on the ice.

“I miss it don’t get me wrong,”said Desbiens. “But I don’t regret my decision to retire one bit. I am very fortunate and lucky because I know it has been a struggle for other players. I made the decision on my own terms and was at ease with that.”

Desbiens currently lives in Minneaplois with his wife, Ally and daughters Olive and Pemm.