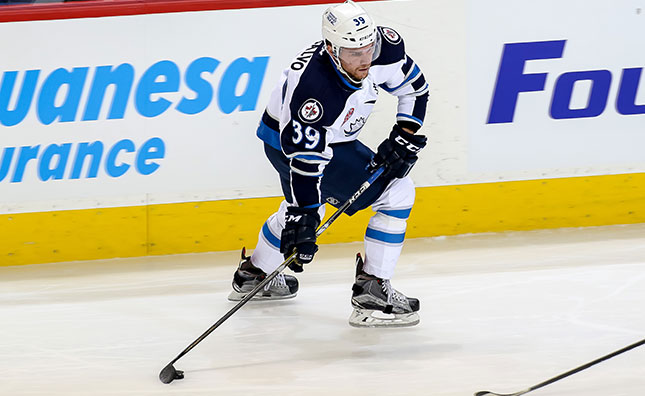 Talk to Dan DeSalvo about his start in hockey and he’ll tell you he was basically born with skates on.  His mom, Judy, was a figure skater. His dad, Larry, played hockey at St. Mary’s University in Minnesota.  His older brother, Nick, was busy with the game ahead of little brother Dan.  With that in mind you might think success came easily to DeSalvo, but it hasn’t been a smooth road for the centre from Rolling Meadows, Illinois.

Standing 5’8”, Dan DeSalvo is not the size of a prototypical NHL centre.  A player at that height is not the first guy clubs look for when tracking talent to build teams around.  Being overlooked isn’t new to DeSalvo, who has 24 points in 25 AHL games, nor does he have a problem with the stereotypes.

In fact, he says working to overcome them makes him better.

“That’s the way it has been my whole career.  I’ve had no problem doing that.  If anything, it helps me for sure,” he said before extended his current scoring streak to three games in Chicago on Sunday. ”You know, gives me some extra fire in my game.”

EXPERIENCED AT BUCKING THE ODDS

As it turns out, Dan DeSalvo has plenty of practice pushing past the limits others place on him.  For example, he was never drafted.  Actually – forget drafted – DeSalvo was late to get an NCAA shot before things worked out at Bowling Green where his brother was a student and worked with the coaching staff.

Even after becoming captain and a valuable contributor to a Bowling Green program on the rise, things were very quiet on the professional front upon graduation.  Aside from some mild interest from a few ECHL teams, it was Tulsa Oilers coach Jason Christie who had the foresight to push for DeSalvo while most of the hockey world looked the other way.

So it was off to Tulsa where he put up 51 points in 55 games before the Moose came calling late last season.

Dan DeSalvo is a driven young man, but he’s more than just a hungry player.  He’s a talented one too.

DeSalvo says he owes some of that to growing up playing with good players in programs like Chicago Mission and Team Illinois.  Dan feels skating with players including Ottawa’s Ryan Dzingel, New Jersey’s Nick Lappin and AHL standouts like Michael Mersch and TJ Tynan on those youth teams helped grow his game.

“Having great players (around you), it pushes you every day.  You want to play with those guys. You hear about them talking to schools and whatnot as you get older and it kind of creates a little competition within yourself.”

DeSalvo is scoring at the AHL level and drawing positive reviews from the Moose coaching staff for his 200-foot game.  However, he’s on a PTO and there’s plenty of forward depth in the Jets’ organization.  So what’s his plan?

More of the same.

No matter what happens, Dan knows one thing for sure.

“At the end of the day you can look yourself in the mirror and, you know, say that you’re giving your best and you know you’re doing the best you can to prove those people (the doubters) wrong.”

Dan DeSalvo and the Moose wrap up a three-game road trip with another stop in his home-state Wednesday, Nov. 30 when they visit the Rockford IceHogs.  Catch the game live on TSN 1290 and moosehockey.com/listenlive starting with the pre-game show at 6:45pm.