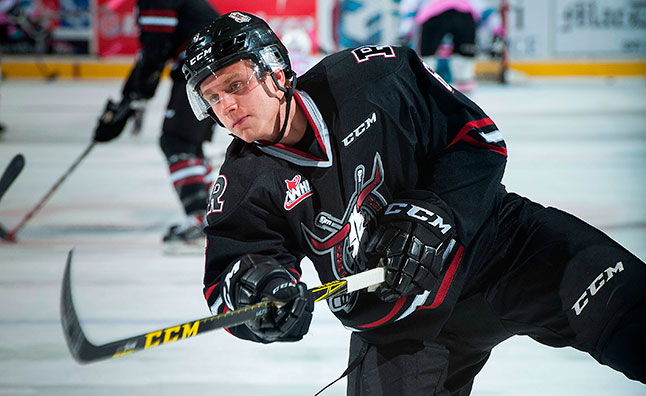 Jets’ prospect Nelson Nogier is a bright guy – winning the 2014 Western Hockey League Scholastic Player of the Year Award is evidence of that.

So, it makes sense the impressive young student of the game would say a few people have been vital teachers in his journey to becoming a pro hockey player.

First and foremost are his parents, mom Lori and dad Pat.

Nelson lights up when talking about the role his folks have played in raising him and helping him strive for his goals.

Interestingly, his dad was a WHL goalie before trading in the pads for a police badge in Saskatoon and Nelson says pops is a great resource.

“My dad’s my biggest role model and I look up to him in everything he does,” said the 20 year-old. “The characteristics and traits he taught me as a kid have helped me develop into the player that I am now and the person that I am both on and off the ice.”

Nelson says one of the most important things about his dad’s influence on him is that it has always come with just the right balance of backing and pushing.

“I can’t thank him enough for knowing the boundaries of when to push me and of when to just be there for support. I mean he’s supporting me all the time, but he definitely fuels to the fire when it has to be fuelled – but it’s nice just to have that extra push from him.”

(RED DEER) REBEL WITH A CAUSE

Nelson looks forward to pro camp in the fall after experiencing the Memorial Cup with the host Red Deer Rebels this past spring.

For Nogier, it was a terrific experience and part of a special time with two quality coaches leading the way.

“With Brent Sutter and Jeff Truitt there as my coaches I was able to learn so much – they’re so knowledgeable about the game and taught me what it takes to be a pro. Brent runs that team like a professional team and that’s going to help me develop into the player I need to be when I make that next step.”

That next step could be in a Manitoba Moose uniform and Nelson’s already aware of what he’s getting into.

Sounds like the student has his homework under control – again.