Moose at the break - Manitoba Moose

Moose at the break 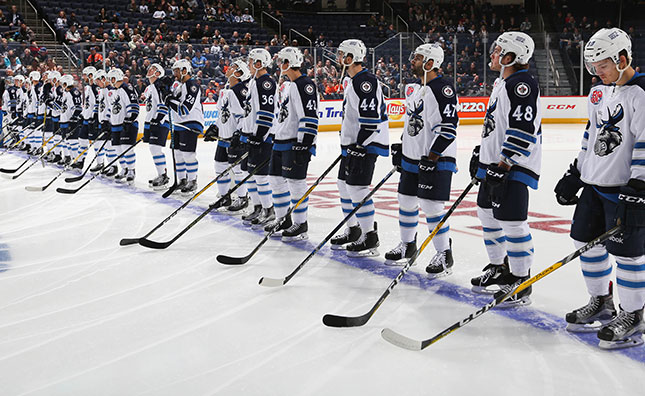 “It’s a great opportunity to re-group and rejuvenate and clearly set our sights on the second half.”

WORKING TO THE END

The Manitoba Moose finished the “first half” on a high with a hard-fought 2-1 win over the Wild in Iowa Monday night.  A tight checking effort lifted the team to .500 through 28 games.

The win came at the end of a five-game road trip, and in the team’s third game in three days. No easy task, especially for a club playing its 16th road game in 28 contests.

It’s not technically the halfway mark of the 76-game schedule, but it’s often referred to as the end of the first half for those close to the league.  Those who know will tell you there’s another level to come once the brief chance to recover and reflect passes.

WHAT WE KNOW SO FAR

Head Coach Pascal Vincent has emphasized the need to work with this Moose roster so each player develops a winning mindset, understands the “cost” of winning hockey games, and develops an ability to consistently compete in a way that gives the team its best chance to climb the standings.

That education is well underway, and the team is vying for a playoff spot after finishing in 28th last season.

Ask GM Craig Heisinger about the team’s play to this stage and he’ll tell you, with a positive tone to his voice, the club isn’t “that discouraged” with a .500 record.

Dig deeper and you’ll learn that the General Manager’s careful assessment has to do with the fact he’s looking at the situation from several points of view.  Chiefly, individual player development and the overall showing of the team.

Heisinger doesn’t believe the high volume of players recalled to the parent club early in the season was overly impactful on Manitoba’s record to this point of the season.

“I don’t take that much into consideration – the injuries at the Jets’ level.” Said Heisinger in a chat in Des Moines the other day. “It’s more the younger guys getting acclimatized to the pro game – is what’s a challenge.”

SO WHAT ABOUT THE YOUNGER GUYS?

Grooming players to be good pros is an inexact science.  Some develop quickly, others need time, and still others never quite get it together.  What you can control is giving prospects the tools, supports, and opportunities to grow – to reach their potential and that’s how the Jets see the Moose.

As Heisinger will tell you, making the jump from Junior or College is a real transition.

“You have a bunch of young players that have always been the best players on their team in junior (or college).  They come here and things don’t always go according to plan for them and it’s a process.  It’s trials and tribulations, and we’ve had some great examples of that.”

Examples demonstrating that Jets’ are on the right track, hat players can experience their potential through time in the American League.

”I don’t think there’s any better example than how Josh Morrissey has played for the Winnipeg Jets this year, and the trials and tribulations he went through here last year with the Moose,” said the Manitoba GM. “That, at the end of the day, is how we measure success and failure.  Some of it is team.   Some of it is individual, and at the end of the day you hope the combination of the two will bring you the results you want.”

If Josh Morrissey is strong evidence of what time with the Moose can do for a player, Jack Roslovic may one day add further support to that approach.

The 19-year old, 2015 first rounder showed steady growth in his game this season after leaving college at Miami (Ohio).  He led the Moose with 19 points in 25 games before being loaned to USA Hockey for camp in preparation for this year’s World Junior Championship in Toronto and Montreal.

“Those types of experiences are always a great opportunity for a young player,” explained Heisinger. “Jack’s come in here and accounted himself very well, done nothing probably but improve over the course of the three months that he’s been here. It’s a process on, not just the offensive side of the game, but the defensive side of the game and learning good habits both on and off the ice. Those are the benefits of playing at this level right now for a young player like Jack.”

While coaching, and facilities are a big part of bringing young  players along so is the way a team is led from within.

The Moose are well-placed in that regard with Patrice Cormier bringing his years of NHL and AHL experience to the group as the captain, and as a captain that’s open to ideas as part of a leadership group.

Heisinger mentioned numerous players as being critical to setting a tone for the team each day and credited them with working alongside Cormier to make the Moose the main focus for each player.

The Moose don’t play from December 19-30.  The team returns to practice on December 28, but it’s a break with a purpose.

“We should be set up well for the second half, just based on the first half and being able to come home rested, rejuvenated coming out of Christmas,” said Heisinger. “It has been our experience over the years, whether it was Moose 1.0 or in St. John’s, the extended Christmas break has always sort of split the season in half for teams that are “outpost teams” that travel a lot, like us, and it really re-charges your batteries for the second half.”

Individual players growing their games, a team coming together to see what it’s capable of, and a well-deserved break.  It’s a good combination for an organization with ambition for the months to still to be played before this season is over.