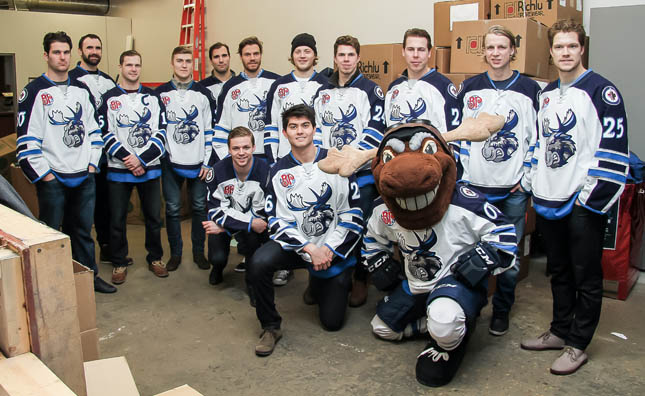 Wednesday was a special day for Manitoba Moose players and staff, and no it wasn’t a game day.

Instead it was a day dedicated to something bigger than hockey.

And, while virtually everything the Moose do is about being a team; divide and conquer was the best approach this time around.

That’s because on this day the club was all about two community projects that mean a great deal to it, and the best way to make the biggest difference was to split in two groups and put in a good hard shift.

Led by Captain John Albert half the team went to Siloam Mission as part of the Manitoba Moose “Share the Warmth” campaign in support of the Mission presented by Red River Co-op.

The players visited Siloam Mission to unload the 2,575 clothing items collected in recent weeks and help with some of the sorting of the items.

Share the Warmth is a push to collect winter clothing to pass along to those in need so they are less vulnerable in the harsh winter conditions that arrive each year.

Goods for the project were collected at the Moose game November 13th when fans were the first star with their generosity dropping off toques, mitts, gloves, and scarves a-plenty.

Many more items were donated at Red River Co-op locations across Winnipeg over the last couple of weeks of November.

Plus, Bridgewater Red River Co-op Gas Bar chipped with a major assist passing along ten cents/litre to the cause on sales made November 19th.

In addition, Tough Duck came up big with a contribution of five-thousand dollars in warm winter clothing items.

Though the players were at Siloam Mission to unload the items that were collected, they also got a tour of the facilities to gain a better understanding of the services offered.

At the same time Wednesday afternoon, the other half of the team was involved in the Manitoba Moose Shutout Hunger Campaign in support of Winnipeg Harvest; also presented by Red River Co-op.

This group offered some muscle in handling some of the food donated to Winnipeg Harvest.

And, like their colleagues on the stop at Siloam Mission, they also got a tour to increase their awareness of the need for community support and the difference being made by agency they were working with.

The Moose Shutout Hunger Campaign is really just about to get started though, and you’re invited to drop off food donations at Red River Co-op locations across the city starting at the end of the month.

The official kickoff to the collection event is at the Moose home game on New Year’s Eve when fans are encouraged to bring non-perishable food items to the rink.

All food collected goes to Winnipeg Harvest and will be distributed to those in need throughout the province this winter.

Two great projects, and two big wins for the community with a little help from your Manitoba Moose!