April 9 Practice Report - One Week to Get In - Manitoba Moose

April 9 Practice Report – One Week to Get In 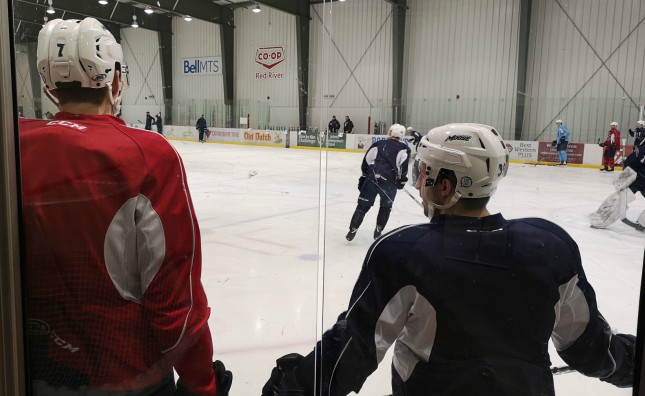 The Manitoba Moose enjoyed a well-earned day off on Monday, but were back to work Tuesday morning at Bell MTS Iceplex.

The final week of the regular season is here and the Moose are in the fourth and final playoff spot in the Central Division with three games to go. Ahead of Iowa on a tie-breaker, and two back of third-place Milwaukee, the Moose also have Texas and Rockford nipping at their heels with everyone having played 73 games so far.

Now it’s all about taking care of what they can control as the try to wrap up a second straight trip to the Calder Cup playoffs which means grinding out results with three road games in three days starting Friday in Grand Rapids, Mich.

Manitoba closed out its final homestand of the regular season with a 3-1-0-0 mark after a loss to Stockton on Sunday snapped the team’s four-game home ice win streak.

Despite the defeat, the Moose are confident they’ll be ready when the chips are down.

“We’ve been talking about that lots here the last couple weeks. That’s what we wanted. We wanted to put ourselves in a position where we’re in the driver’s seat and we have a chance to make the playoffs, and we’ve done that here,” said Captain Peter Stoykewych. “It’s nice the record we’ve had, but we need points as well. We needed them here (Sunday), didn’t get them but we still know we’re in a good spot here heading on the road.”

The Moose have turned their season around going 13 games over .500 (26-13-3-2) since Dec. 30 to climb all the way out of the basement of the American Hockey League standings and into contention for a post-season berth.

It’s a spectacular run bolstered by their work on home ice. Even with Sunday’s loss to Stockton, Manitoba dropped just three games in regulation time at Bell MTS Place in its last 24 outings (19-3-1-1).

“Do you believe in miracles? That’s what I would have said I think,” explained head coach Pascal Vincent when asked what he would have said if someone had told him at Christmas the club would match a franchise record with 25 home wins. “We’ve had 11 players out of the lineup for six weeks before Christmas time, but we were working together and creating good habits even though we weren’t winning games. Coming of Christmas break the way those guys have been playing as a team together. Individually we have good players, but as a group we’re playing collectively that makes us special. So if someone told me that then it would have been hard to believe, but seeing those guys play… the way they’ve been playing since the Christmas break… I have to start believing in miracles.”

While Manitoba has dazzled at home, the team’s away form is coming along too going 5-2-1-0 in their last eight on the road with wins in Toronto, Belleville, Colorado (2), and San Antonio.