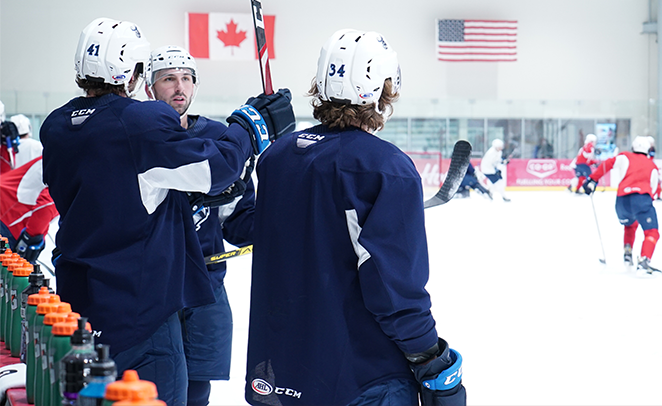 The Manitoba Moose held practice at Bell MTS Iceplex Monday after splitting a two-game series with the Chicago Wolves on Friday and Saturday.

Manitoba just returned from a seven-game road trip where they won three games and lost four, but head coach Pascal Vincent says there are some positives the team can take away from the situation.

Meanwhile during their short home stand, forward Kristian Reichel scored his first goal of the season after returning from injury, and says it has done a lot for his confidence.

“Felt really good when you score first game back from injury,” Reichel said. “I think that just helped me and pushed me to move forward.”

Another forward playing with confidence as of late has been Skyler McKenzie. In his last eight  games, the second year pro has registered seven points and gives a lot of credit to his line mates C.J. Suess and Emile Poirier. The forward also feels comfort and confidence are big contributors.

“Last year I was new to the league I was just trying to learn all the systems,” McKenzie said. “This year I’m playing out there without having to think the game and that has a lot to do with it.”

The Moose hit the road again to take on the Texas Stars on Wednesday, Dec. 11. Puck drop is scheduled for 7 p.m. CT The game will be broadcast on TSN 1290, moosehockey.com/listenlive and AHLTV.