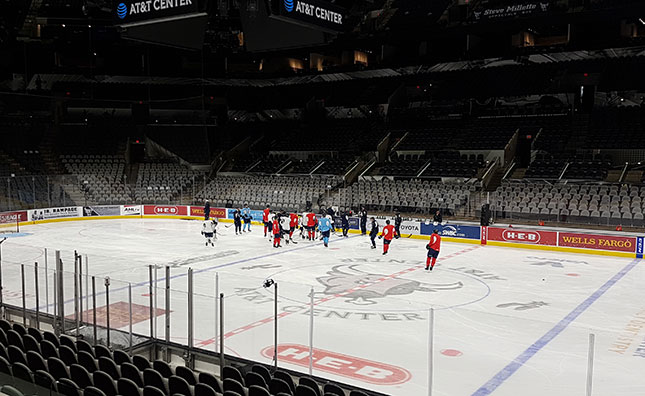 After a long travel day on Sunday, the Manitoba Moose got out on the practice ice today at San Antonio’s AT and T Center in preparation for tomorrow morning’s 10:30 A-M matchup against the Rampage.

Joining the club for today’s skate was the team’s newest member, Logan Shaw.  The two-way forward was signed to a one-year, two-way contract by the Winnipeg Jets yesterday and, after clearing waivers, was assigned to the Moose in time for today’s practice.

A veteran of 180 NHL games and 156 AHL outings, Shaw started the 2018-19 campaign with the San Diego Gulls, the AHL affiliate of the Anaheim Ducks.  The Glace Bay, Nova Scotia native posted two goals and five points in seven games with the Gulls.

Shaw relishes the opportunity to show the Jets organization he can be an asset to the club.

The Moose face the Rampage to kick-off a four-game road swing in the teams’ third meeting of the season.  Manitoba picked up four points out of the two-game set in downtown Winnipeg last month.

Coverage of tomorrow’s game begins at 10:15 a.m. on TSN 1290 with puck drop between the Moose and Rampage slated for 10:30 a.m.  Not at your radio?  Don’t forget the game is also available through the Moose App, moosehockey.com/listenlive and on AHLTV.