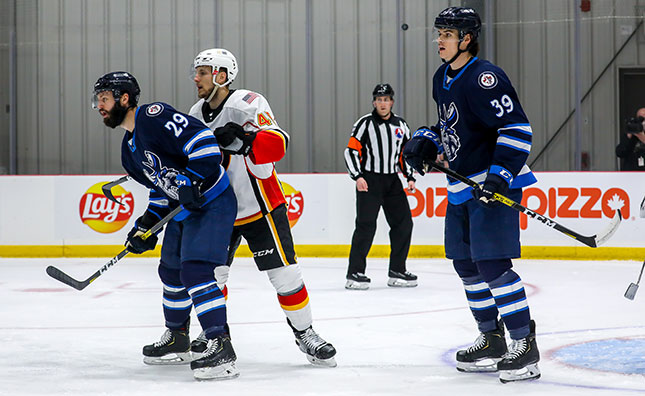 When it comes to the American Hockey League, a good portion of the focus is on the top NHL prospects playing in the league. Winnipeg Jets and Manitoba Moose fans were lucky to see the top Jets draft pick from each of the past four years skating with the Moose earlier this season. 2020 10th overall pick Cole Perfetti ranks second on the team with 17 points (6G, 11A). 2018 fifth round selection Declan Chisholm paces the team’s defencemen with 11 points (2G, 9A). The Moose have seen 12 Winnipeg Jets draft picks suit up for the team and provide contributions this season.

All that said, it can be the unheralded AHL contract signings that provide just as large of an impact for a team. This season that is brilliantly exemplified by forwards Nathan Todd and Jeff Malott.

Moose fans were already familiar with Nathan Todd when he signed an AHL contract with the team this summer. Todd appeared in 16 games with Manitoba during the 2019-20 campaign and recorded one goal. Malott was an unknown factor, coming to the club from Cornell University where he posted 13 points (6G, 7A) in 29 games. Fans would have been forgiven for seeing the pair as added depth for the team coming into a new season.

Todd’s rise was meteoric after being held off the scoresheet in the season-opener. He tallied points in nine consecutive games and found the scoresheet in 11 of his first 13 outings of the season. That torrid pace saw Todd claim, and hold for a time, the top spot in the AHL’s scoring race. Currently, Todd leads the Moose and is tied for 18th in league scoring with 20 points (8G, 12A) in 24 games.

“I think confidence is huge. When you see guys play with it, they’re maybe trying new things or not scared to do other things,” said Todd coming off a three-assist performance on April 12. “I felt really good, I felt fast and felt like the puck was moving quick on our line.  So we had opportunities to make moves, make plays and get on the board.”

Malott has been a steady producer while racking up 11 goals and 15 points throughout the campaign. The Burlington, Ont. product hasn’t gone more than three games without a point this season. He has only had one goalless stretch of three games and one of four. Malott also ran together three-game goal streaks from March 6-10 and April 8-12. Malott is tied for eighth among the league’s goal-scorers and is tied for the top spot among rookies.

“In terms of what I expected for this year, I didn’t really have a set amount of offensive production,” commented Malott. “I’m playing with great players and we’re playing well as a team. I think it’s a combination of fortunate bounces and working hard as a unit.”

Neither was drafted by an NHL team.

Malott is the only undrafted player among the top-20 rookie goal-scorers and one of just four among the top-20 rookie point producers. Meanwhile, Todd is one of just three undrafted players to rank in the top-20 of league scoring. Players not selected in the NHL Draft have been critical to Manitoba’s offence this season. Of the 72 goals scored by the Moose so far this season a total of 41 were scored by players who weren’t picked during the NHL draft.

The pair have chemistry together as well. Todd and Malott have been on the same line for 14 consecutive games dating back to March 5. They’ve had C.J. Suess, David Gustafsson and Cole Perfetti as centremen with Suess covering most of the duties. Members of the line were very productive in the most recent series against Belleville. Malott led the way with five points (3G, 2A), Todd followed with a goal and three assists while Suess tallied twice and added a helper.

“The expectation we have for each other is that someone’s always going to be within a stick-length. Or someone’s always going to be crashing the net,” Malott detailed. “I think we have the confidence in each other and I think it’s a matter of getting reps together. We’ve been playing together for a good amount of time now and it’s been fun. So hopefully we can keep things going and continue to have success.”

Todd feels it comes down to how hard they are willing to work, with some scoring touch sprinkled in.

“We all work hard,” said Todd. “Jeff’s a big body. He can get in the corners. He can make plays and he can put the puck in the back of the net, obviously with 11 goals this year. No matter who’s down the middle, whether it’s (Suess) or (Gustafsson), they both work hard and move the puck and we seem to be gelling really well with both guys.”

With 12 games remaining on the schedule there’s still plenty of time for Nathan Todd and Jeff Malott to build on their stellar seasons. The Moose get back to game action April 22nd against the Stockton Heat. The teams play a five-game series to put the wraps on a near two-month home stand for Manitoba.

Come on with that moooooooove 🤩