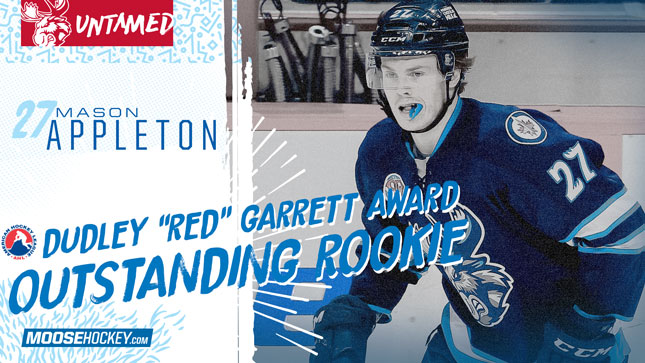 Winnipeg, MB – The Manitoba Moose Hockey Club, in conjunction with the American Hockey League, announced today that forward Mason Appleton has been voted the winner of the Dudley (Red) Garrett Award as the AHL’s Outstanding Rookie.

Appleton, 22, is the first player in franchise history to win the Dudley (Red) Garrett Award.  He joins head coach Pascal Vincent (Louis A.R. Pieri Award) and defenceman Sami Niku (Eddie Shore Award) as Manitoba Moose to be honoured by the AHL’s coaches, players and media this season.  The 2017-18 Moose are just the fourth team since 1968 to be awarded outstanding coach, defenceman and rookie honours in the same year.  Previous teams include the 2011-12 Norfolk Admirals, 1976-77 Nova Scotia Voyageurs and 1974-75 Providence Reds.

A sixth round selection, 168th overall, of the Winnipeg Jets in 2015, Appleton leads all AHL rookies, and is tied for fourth in the overall points race, with 63 points (21G, 42A) in 73 games this season.  The Green Bay, Wis. native leads first year AHL’ers with 42 assists, is tied for second with 186 shots on goal, tied for third with six game-winning goals, and tied for ninth in goals. The former Michigan State Spartan has already captured Moose franchise records in assists and points by a rookie, and is the first Moose player to reach the 60-point plateau since the 2008-09 season.  He is one of five AHL rookies who currently lead their team in points.

Appleton has already been named to the First AHL All-Star Team and AHL All-Rookie Team.  He also represented the Moose at the 2018 AHL All-Star Classic and was recognized by the league as the CCM/AHL Player of the Week for the period ending Nov. 19.

Mason Appleton and the Moose are in Cleveland tonight to face off against the Monsters at Quicken Loans Arena.  Tune in to TSN 1290 and moosehockey.com/listenlive starting at 5:45 p.m. CT.

Tickets for Moose home games in the 2018 Calder Cup Playoffs are on sale now, and are available at moosehockey.com/tickets.