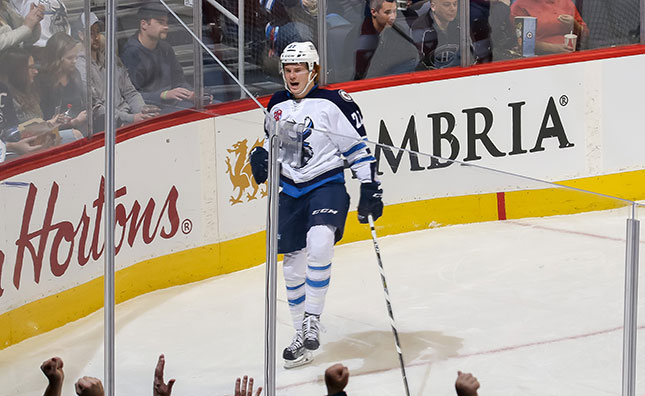 Winnipeg, MB – The Manitoba Moose, in conjunction with the American Hockey League, are pleased to announce Mason Appleton has been named the CCM/AHL Player of the Week for the period ending Nov. 19.

Appleton, 21, led the AHL with six points (3G, 3A) while posting a plus-four rating and scoring two game-winning goals, helping the Moose to three wins this past week and first place in the Central Division.

On Wednesday, Appleton scored the game-winning goal, a power play marker, in a 3-2 Moose win over Chicago.  Friday night saw the Green Bay, WI native tally two assists, including the primary helper on Jack Roslovic’s game-winning goal as the Moose topped Chicago 6-4.  Appleton finished the week with a bang, scoring the game-winner and racking up three points (2G, 1A), factoring in on each of Manitoba’s first three goals, in a commanding 5-2 win over Laval.  Appleton was named the first star of Sunday’s contest.

Appleton’s explosive week puts the Winnipeg Jets 2015 sixth round pick into a tie for 18th in the AHL points race with 16 points (5G, 11A) in 18 games.  That mark places him third among rookies, two points off the lead.   Appleton ranks second on the Moose in points and assists.  He is also second among rookies with eight points (4G, 4A) during the month of November.

In recognition of his achievement, Appleton will be presented with an etched crystal award prior to an upcoming Moose home game.

Mason Appleton and the Manitoba Moose are in action Tuesday when they face the Laval Rocket in a rematch of Sunday’s game.  Tickets for the 7 p.m. contest are available at moosehockey.com/tickets.