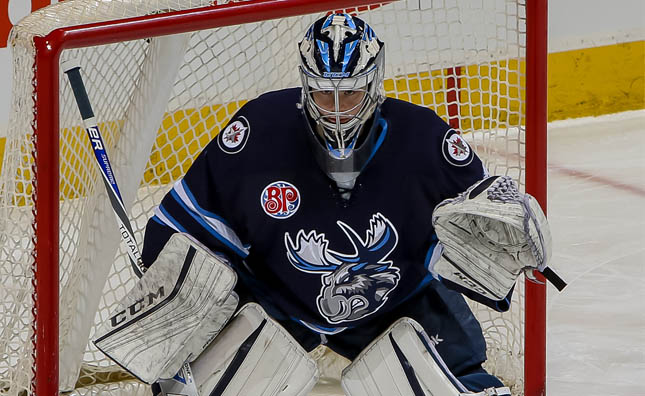 Eric Comrie was incredible in the Moose net making a career high 49 saves giving the Moose a chance to earn a point in a 2-1 shootout loss. Comrie made 37 saves in the second and third periods alone and he now leads all AHL goaltenders in saves with 845.

Emile Poirier opened the scoring in the second period for the Heat after being sent in on a partial breakaway after a long stretch pass from Freddie Hamilton.

The Moose continued to show their fight and pushed hard in the third period to even the game.

They finally did when Brenden Kichton jumped on a rebound after a Chase De Leo shot with just 4:44 remaining, which eventually sent the game to overtime.

Following overtime, the game was ultimately decided in a shootout where Stockton’s Derek Grant was the lone goal scorer.

Kevin Poulin was also solid in the Heat net making 30 saves in a game that had many chances both ways.

The Moose and Heat will play the rematch on Saturday night at the Stockton Arena. Game time is set for 9:30 p.m. CT.