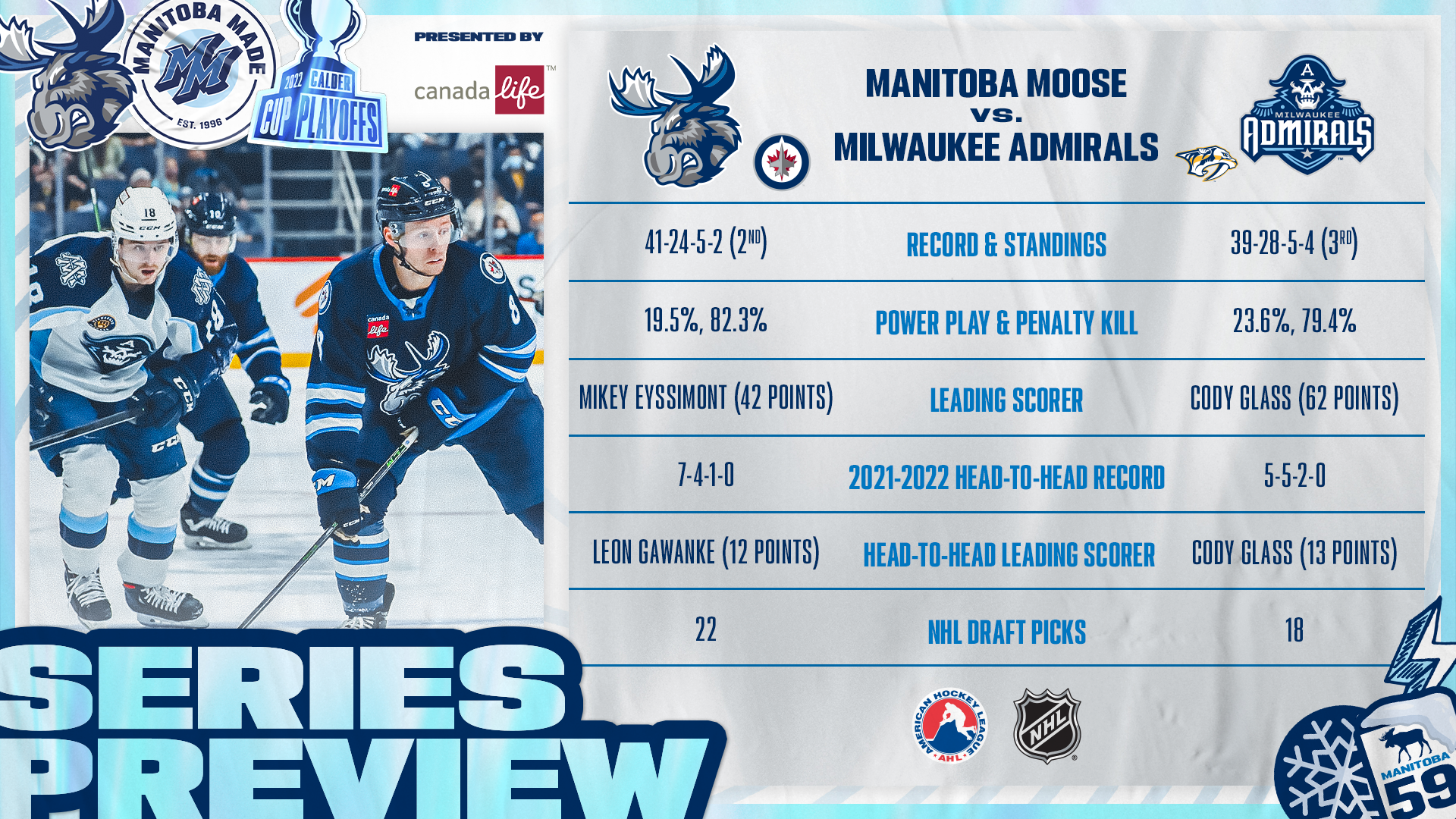 The Manitoba Moose begin their quest for the Calder Cup on Friday, May 6 in Milwaukee. The Moose and Admirals clash in the best-of-five Central Division Semifinals.

Tickets for Moose home games are available at MooseHockey.com/TICKETS. For 2022 Calder Cup Playoff ticket packages, which guarantee seats for all Moose home games, are available at MooseHockey.com/PLAYOFFS. Fans are encouraged to wear their playoff whites. Check out Jets Gear stores at Canada Life Centre, Kildonan Place, Polo Park and St. Vital Mall, as well as TrueNorthShop.com, for limited edition Moose Playoff apparel and get loud with Moose-branded clappers handed out at home games.

Moose on CJOB, TSN and AHLTV

Listen to coverage of every Central Division Semifinals game on 680 CJOB, CJOB.com/sports and the Manitoba Moose App. You can also watch all the road and home action live with a subscription or day pass to AHLTV. Coverage begins 30 minutes prior to puck drop.

The Moose finished the regular season with a 41-24-5-2 mark, good for 89 points and a .618 points percentage. That finish ranked Manitoba second in the Central Division, the team’s highest divisional placement since returning to Winnipeg for the 2015-16 campaign. A large part of that was the team’s play at home where the Moose set a new franchise mark with a .722 points percentage on home ice this season. Manitoba also matched a franchise record by winning 25 games at Canada Life Centre.

A total of 14 players appeared in games for both the Manitoba Moose and Winnipeg Jets this season. Seven of those players made their NHL debuts with the Jets. Leading the way on the Moose playoff roster is forward Kristian Vesalainen who appeared in 53 NHL games during the regular season. Fellow forward Morgan Barron played 27 NHL games on the campaign split between the New York Rangers and Winnipeg Jets. On the blueline, Dylan Samberg appeared in 15 NHL games and Ville Heinola got in 14 games with the Jets. The Moose roster currently features 14 Winnipeg Jets draft picks, including six players selected by the Jets in the first two rounds of the NHL Draft.

Six of the nine skaters in the Manitoba defence group are Winnipeg Jets draft picks. Leon Gawanke led the Moose defence with 36 points (10G, 26A) in 65 games. Johnathan Kovacevic paced the group with a plus-23 rating, which ranked 10th in the AHL. With Kovacevic and Gawanke scoring 11 and 10 goals respectively, the Moose had multiple 10-goal defencemen for the first time since the 2011-12 campaign when the team operated as the St. John’s IceCaps. The club also featured four defencemen (Gawanke, Kovacevic, Declan Chisholm and Ville Heinola) with 26 or more points. It’s the first time since the 2000-01 season the Moose had four defenders reach the mark.

Mikey Eyssimont led the club with 42 points (18G, 24A) in 58 games tying for 80th in AHL scoring. Despite not having a highly-ranked scorer, the Moose did have nine players record at least 30 points, 14 skaters pick up at least 20 points and 23 players reach double-digits. A total of 10 players on the Moose roster posted 10 or more goals during the regular season.

Milwaukee’s leading scorer through the regular season was Winnipegger Cody Glass. The former sixth overall pick racked up 62 points (14G, 48A) and was the first Admiral since the 2007-08 season to record at least 40 assists in a season. Glass was one of two Milwaukee skaters to surpass the 60-point plateau this season, the first since 2011-12. While not a native Manitoban, forward Cole Smith played his junior hockey with the MJHL’s Steinbach Pistons, racking up 84 points (38G, 46A) in 92 games from 2014-16. Smith became the 13th rookie in Admirals history to score at least 20 goals as part of a 41-point (21G, 20A) season.

The Admirals got off to a slow start on the season with a 5-12-1 record through the first 18 games of the campaign. That mark left the team last in the Central Division standings on Dec. 1. Milwaukee’s next 58 games saw the club post an impressive 34-16-4-4 record on the way to finishing third in the division. The Admirals haven’t lost consecutive games in regulation since January 8 and 12.

The Manitoba Moose host the team’s third annual Player Awards Show tonight at 6 p.m. CT on Youtube, Twitter and Facebook. The Moose hand out seven awards this evening while hosts Daniel Fink and Austin Siragusa look back on the regular season and preview the Calder Cup Playoffs.

Media information, game notes and previous playoff records can be found at MooseHockey.com/Media.