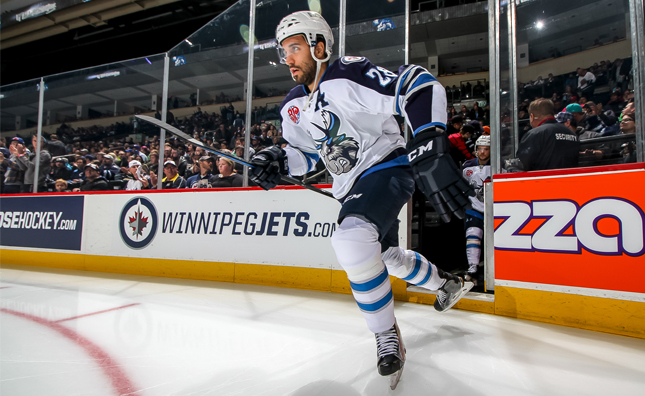 The Manitoba Moose will face their long-time rivals the Chicago Wolves for the first time in Winnipeg in nearly five years tonight at the MTS Centre.

The Moose will be playing their first game at home following a five game road trip that saw them play against Milwaukee, Chicago and Charlotte. During the trip the Moose had a combined record of 2-3-0-0 and picked up their first win of the season. Manitoba is searching for their first victory at home this year.

The last time the Chicago Wolves made the trek to Manitoba was for a pair of games which crossed over into different years on Dec. 31 2011 and on Jan. 1, 2011. The teams split that series with the Moose taking the New Year’s Eve match 4-1 and Chicago responding on New Year’s Day with a 3-2 victory. Interestingly, current Winnipeg Jets defenceman Paul Postma scored two goals and had a three point night for the Wolves in the second match.

King of the Crease:

Connor Hellebuyck has been nothing short of outstanding to start the season and red hot as of late. Hellebuyck earned his second win of the season last Saturday and his first shutout of the season. In each of his last six starts he has made 25-plus saves and has a .955 save percentage in that span. He is currently tied for eighth in the league in goals against average with 2.12, is fourth in saves with 261 saves and is fourth in save percentage at .939.

Moose forward JC Lipon had a big weekend for the Moose scoring in both games against Charlotte. On Saturday he scored into an empty net while shorthanded to solidify a Moose victory. He then had Manitoba’s two goals on Sunday and now leads the team in goals scored with four. He is the only player on the Moose with at least an even strength goal, a powerplay goal and a shorthanded goal.