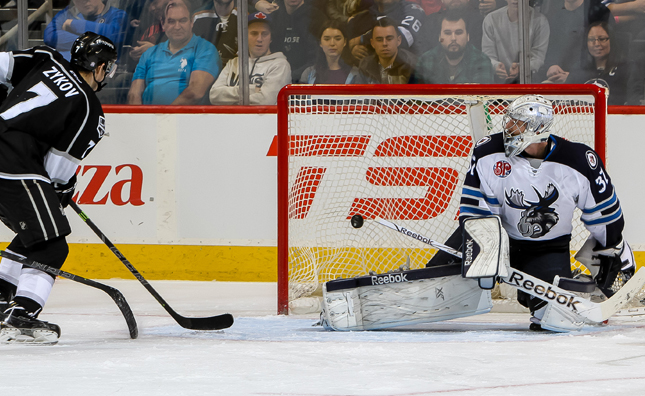 That goal came on the powerplay with just seven seconds remaining in overtime to give the visiting Ontario Reign a 1-0 win. Forward Valentin Zykov was left alone in front and was able to get a rebound past Hellebuyck for the game winning goal.

The Reign, who were last year’s Calder Cup champions while playing as the Manchester Monarchs, were tough to handle for the young Moose team in the two games.

Manitoba responded well following the team’s Home Opener loss on Thursday to the Reign.  The Moose had plenty of chances of their own but goaltender Peter Budaj played well again for Ontario making 20 saves. He currently leads the AHL among goalies who have played more than 60 minutes with a 0.32 goals against average and .983 save %.

For Hellebuyck it was his ninth career 40-plus save performance since his rookie season last year. The Winnipeg Jets fifth round pick in the 2012 NHL Entry Draft was selected as the game’s first star.

The Moose will return to action with another pair of home games, this time against the Lake Erie Monsters on Thursday, Oct. 22 followed by a rematch on Saturday, Oct. 24. Both games are scheduled for a 7 p.m. CT puck drop.