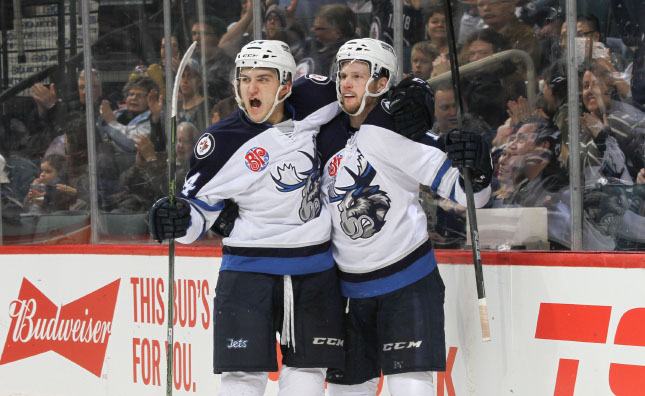 The Moose responded in a big way on Saturday afternoon in the rematch against the Toronto Marlies at the MTS Centre.

JC Lipon led the charge with an incredible five point performance which helped give the Moose a 6-5 overtime victory over the Marlies.

It was Chase De Leo who got things started for the Moose scoring the game’s first goal just 47 seconds after the puck was dropped.

The AHL’s top team in the standings, the Marlies stormed right back by scoring three goals including the last one just 20 seconds into the second period on a powerplay goal from Connor Brown.

The Moose showed their resilience by responding with three goals of their own from Austen Brassard, John Albert and Chase De Leo, who scored his second of the game early in the third period.

After Nikita Soshnikov scored for the Marlies, Manitoba and Toronto traded goals from JC Lipon and William Nylander to send the game to overtime.

In overtime, both teams had their chances but it was Nic Petan who scored the winner off a beautiful backhand pass from JC Lipon.

The assist gave Lipon just the eighth five-point game in franchise history and first since Mason Raymond had three goals and two assists on Nov. 21, 2007.

Petan’s game winner was his second straight game scoring a goal. He now has at least one point in six of his last seven games and has scored three goals and four assists during that stretch.

Defenceman Brenden Kichton picked up his 100th career AHL point with an assist.

Eric Comrie picked up his tenth win of the season making 38 saves. It is the eighth time this season Comrie has made 35+ saves in a game this year.

The Moose will continue their home stand when they welcome the Texas Stars to the MTS Centre for the first time as part of a two game series on Tuesday, Feb. 9 and Wednesday, Feb. 10. Both games get underway at 7 p.m. CT.