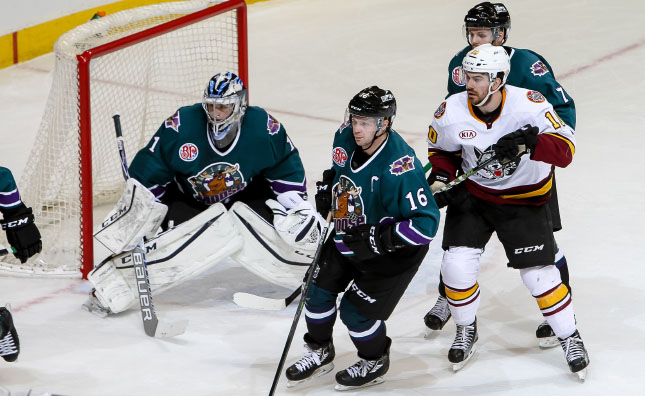 The Manitoba Moose had another solid effort but it wasn’t quite enough to earn two points on home ice against their long-time rivals the Chicago Wolves on Saturday afternoon at the MTS Centre.

Both teams certainly played a physical game that went all the way to overtime where Chicago’s Danny Kristo scored in the extra frame to give the Wolves the 3-2 win.

The OT loss didn’t spoil the day for the 9,249 fans in attendance as the Moose celebrated Throwback Jersey Day.

The Moose sported replica jersey’s from their inaugural seasons back in 1996 and looked sharp in the old green, black and purple colours. Fans were also treated to a live organ player, retro graphics on the scoreboard and tons of music hits from the 90’s. Former Winnipeg Jet and Moose Captain from the inaugural 96-97 season, Randy Gilhen was on hand to drop the ceremonial first puck.

John Albert scored his eighth goal of the season and third in his last four games. The Captain of this year’s Moose team has recorded a point in every game in February and is on a five game point streak.

Chase De Leo scored his team leading 14th goal of the season as he continues to lead the Moose in points with 28 (14G, 14A).

Jacob Doty, Phil Cannone and Danny Kristo were the goal scorers for the Wolves.

Eric Comrie got the start in the Moose net and made 35 saves in the overtime loss.

The Moose and Wolves will play their eighth and final meeting of the regular season on Sunday afternoon at 2 p.m. at the MTS Centre.