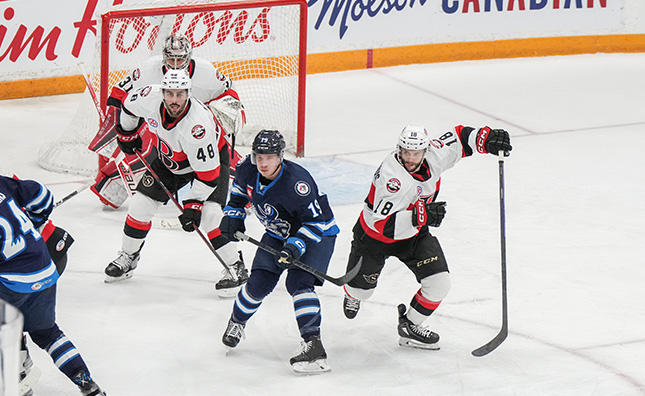 The Manitoba Moose (17-11-2-1) tangled with the North Division’s Belleville Senators (15-16-3-0) on Saturday evening at CAA Arena. Manitoba was coming off a 5-4 overtime win against Laval on Friday evening.

Belleville struck first in the opening frame. Viktor Lodin accepted a pass from Ridley Grieg and used a screen to slide the puck through the pads of Arvid Holm. Manitoba struck back and tied the contest with 1:40 left in the opening stanza. Brayden Burke sauced the puck across the slot where Kristian Reichel fired it quickly up and over Kevin Mandolese. The horn sounded to end the first with the two squads tied one apiece and the Moose leading 7-3 on the shot clock.

Belleville reclaimed the lead in the middle frame with a goal on the man-advantage. Joe Carroll took a rising shot that whipped past the shoulder of Holm to find the back of the net. Manitoba was granted a chance on the power play, but was unable to find the equalizer. The Senators power play tally was the only goal of the frame. Manitoba trailed 2-1 after 40 minutes, but outshot Belleville 15-6 in the stanza.

The Senators potted some insurance 55 seconds into the third with a goal off the rush from Scott Sabourin. Belleville pulled further ahead with a tally as Jacob Larson poked a puck to the back of the net. Manitoba pulled Holm early and went on the hunt for offence. Belleville got a hold of the disc and Sabourin hit the empty net for his second of the period. Belleville added another tally late in the contest, this time off the stick of Ridly Greig after a two-on-one rush. The horn sounded to draw the game to a close with the Moose dropping the contest 6-1. Holm was hit with the loss and made 13 saves, while Mandolese captured the win on the back of 31 stops.

Manitoba continues its road trip with a contest against the Toronto Marlies at Coca-Cola Coliseum on Wednesday, Jan. 11. Puck drop is slated for 6:00 p.m. CT. You can catch the game on CJOB.com/sports, the new Winnipeg Jets App, and AHLTV.