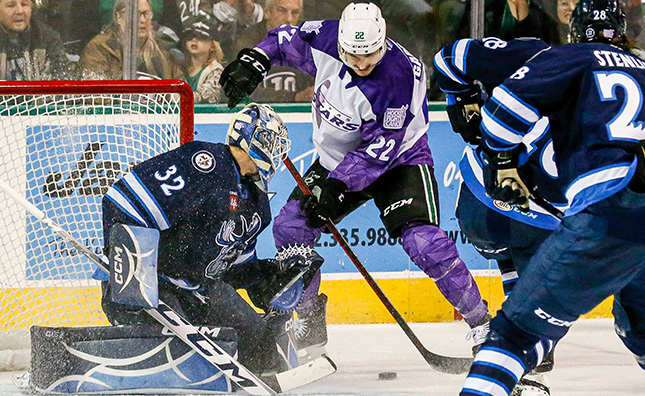 The Manitoba Moose (7-3-2-0) clashed with the Texas Stars (7-5-2-1) Friday evening at H-E-B Center. It was the first of two straight games on the weekend between the Moose and Stars. Manitoba was coming off a 4-3 overtime victory against Calgary on Sunday.

Manitoba opened the scoring with its first shot of the contest. Jeff Malott fed Kevin Stenlund as he drove into the zone. The forward had a step on the nearest Stars defenceman and picked his spot with a quick shot past Matt Murray for his fourth of the season. Tensions boiled over as the period wore along and resulted in 24 minutes in penalties being doled out between the two sides. Arvid Holm kept the Stars off the board after a busy first that saw the netminder finish with 16 total stops.

Texas struck back less than two minutes into the second frame. With Manitoba on the penalty kill courtesy of the infractions at the end of the first, Riley Barber beat a screened Holm with a quick wrist shot. Texas took the lead almost halfway through the period with a wicked shot from Fredrik Olofsson that found the top corner. Manitoba pulled even near the end of the middle stanza as Leon Gawanke ripped a shot into twine on the man-advantage off a cross-ice pass from Stenlund. Both squads retired to their dressing rooms on even terms despite Texas leading the shot count 26-9.

Manitoba pulled ahead in the third. A good shift of pressure led to an Ashton Sautner shot from the blueline. Through the ensuring traffic, Jeff Malott cleaned up the rebound for his second point of the evening. Malott pushed the Moose ahead by two goals six minutes later as he roofed his second of the period in tight over Murray. Texas struck back and pulled within a goal with a power play marker that was feathered off the stick of Will Butcher with just over two minutes left. Alex Limoges restored the two-goal lead with his third of the contest into an empty net, but the Stars fired back with a late marker from Mavrik Bourque. With 10 seconds to play the Stars drew even as Butcher scored his second of the period and sent the game into overtime. The extra frame was ended by Jacob Peterson who recorded a power play tally to complete the Stars comeback and give the home side a 6-5 win. Holm finished with 36 saves and was tagged with the loss. Murray made 16 stops for Texas and notched the victory.

Manitoba clashes with the Texas Stars once again at H-E-B Center on Saturday, Nov. 19. Puck drop for is slated for 7 p.m. You can also catch the game on CJOB.com/sports, the new Winnipeg Jets App, and AHLTV.