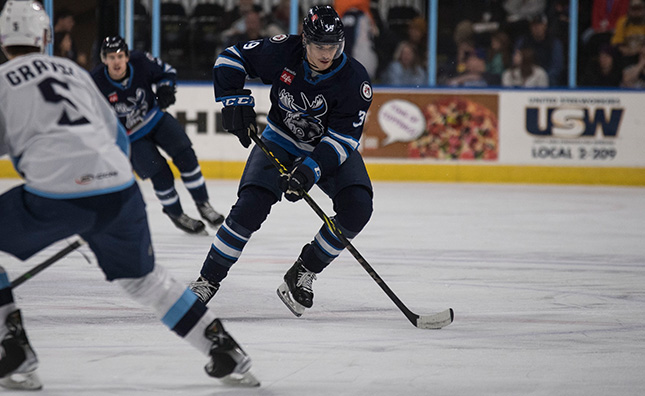 The Manitoba Moose (8-4-2-0) took on the Milwaukee Admirals (11-4-0-0) Tuesday evening at UW-Milwaukee Panther Arena. It was the third contest of a five-game road swing for the Moose. Manitoba was coming off a 4-3 shootout victory against Texas on Saturday night.

Manitoba opened the scoring with just over three minutes to play in the first. With the Moose on the power play, Alex Limoges sent the puck to Jeff Malott. The forward deftly stepped off to the side of the net and slid the disc quickly through the five-hole of Yaroslav Askarov. It was Manitoba’s fastest power play tally of the season, scored in just six seconds. Oskari Salminen kept the Admirals off the board in the first 20 minutes and walked down the tunnel to the Moose dressing room with the lead on the back of 15 total stops.

Milwaukee tied the contest in the second with a power play marker of their own. With the two Moose skaters in the box, Jordan Gross uncorked a hard shot from the high slot that beat Salminen. The Admirals goal was the only scoring in the middle stanza. Salminen was the busier of the two netminders and made seven saves as the horn sounded and the frame came to a close.

The Admirals took the lead 52 seconds into the third period as Cole Schneider finished off a slick play from Luke Evangelista. Milwaukee pushed its lead to 3-1 with a goal from Tommy Novak. Milwaukee added a third goal in the frame as Tim Schaller tapped home a rebound to make it 4-1, seven minutes into the period. Manitoba called Salminen to the bench for an extra attacker with 5:48 left in the frame as they searched for offence. The Moose applied pressure for the next three minutes, but Markus Nurmi jumped on a breakout pass and deposited the puck into the empty net to give the Admirals a 5-1 victory. Salminen finished with 29 saves and claimed the loss, while Askarov made 30 stops and picked up the win.

“Going into the third, it was a 1-1 game until it got away from us. There were some turnovers, some breakdowns in our end. There were some bang bang plays in the back of our net and we were chasing. It’s tough to come back from that hole.”

Manitoba continues its road trip with a contest against the Grand Rapids Griffins at Van Andel Arena on Friday, Nov. 25. Puck drop for is slated for 6 p.m CT. You can also catch the game on CJOB.com/sports, the new Winnipeg Jets App, and AHLTV.